The government has announced that mandatory quarantine has been extended to all inbound passengers.

In a press conference addressed by Prime Minister Robert Abela and Deputy Prime Minister and Health Minister Chris Fearne on Friday afternoon, the government announced that everyone who enters Malta as from today will have to be subjected to mandatory quarantine.

Prime Minister Robert Abela warned third country nationals that if they are found in breach of quarantine directives they will lose their work permit. Further, those who do not observe mandatory quarantine will be fined €1,000 for every breach. This measure was already announced on Thursday.

Abela said that he was aware that third country nationals were not observing self-quarantine or mandatory quarantine. He said that such individuals whose stay in Malta depends on a work permit should be warned that if found in breach of quarantine directives they will lose their work permit and be deported to their home country.

According to Abela, Police have started carrying out spot checks at the homes of those who should be under mandatory quarantine. Until the briefing he was not informed about anyone caught to be breaching the quarantine directive.

Deputy Prime Minister and Health Minister Chris Fearne said that there are three food depots around the country. He reminded the public that those individuals who are in mandatory quarantine or under self-quarantine and are in need, can call on 21411411. Fearne urged the public to only make use of the number and resources if they are in “real need”.

The Health Minister also explained that in the coming days an online medical consultation will be rolled out to avoid crowding at the Health Centres. All affected patients will be informed accordingly.

Fielding questions from the media, the government said that there was no dedicated transport from the point of entry – ports or airport – for all those who will undergo mandatory quarantine. The new measure will subjected everyone to mandatory quarantine without distinguishing whether the person was returning from a high-risk country.

Fearne explained that on arrival people are screened for symptoms. Those who exhibit symptoms will be isolated immediately and subjected to a swab test. If found to be positive they would be taken to Mater Dei Hospital in a special ambulance. Fearne said that such dedicated transport is not needed. He added that unless the person is symptomatic there is no transmission. When a person does not show symptoms associated with coronavirus, then there will be no transmission. He said that incubation period can take up to fifteen.

Screening between the islands

As of Friday evening, all those boarding the Gozo Ferry will be screened. The measure was announced by the government on Friday. Thermal screening of passengers for coronavirus symptoms have been extended for travel between the two islands.

Abela also referred to another measure announced by the Transport Ministry which says that no bus passengers will be allowed to stand on the bus as of Friday. All passengers have to be seated.

The government urged the people to remain calm and against panic saying that there was no need to stock on food. Abela mentioned discussions underway on whether to limit the number of people that can be present in a supermarket at any one time.

He also warned parents that taking children to the playground to meet their friends undermined the measure taken on Thursday to close down schools for a week. Abela explained that the school closure was to avoid having children aggregating in one place.

During a press conference Profs. Gauci said that 2 men and a woman have resulted positive to COVID-19. 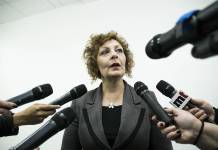