Prime Minister Robert Abela hinted at an election in a few months saying that he looks forward to being judged by 16-year-olds. During his budget speech, Abela called for an agreement on changes to the divorce law, which, he said, was creating so much hardship to so many people.

In his first budget speech, Abela also said that the coronavirus pandemic will be a thing of the past in a few months, once the vaccine is found. He is also optimistic that Malta’s economy will recover in the first quarter of the upcoming year.

The first reading of the budget was approved with 37 votes in favour and 27 against.

Yesterday, Opposition Leader Bernard Grech addressed the House of Representatives on the financial estimates for 2021.

In his reply, Grech thanked the frontliners in the ongoing pandemic saying that in this pandemic their sterling work was not recognised by the government. He said that the Budget touted as the best budget ever has been given the lie through a series of stories which show the lack of preparation, lack of containment for Covid-19 and lack of willingness to be transparent on the reality of the Electrogas contract.

This was the first budget speech by Grech who emphasised that the vision of the Opposition is to ensure that all policies are centred on the wellbeing of the citizens so that these can be the best versions of themselves.

The European Commission is taking legal action against Malta over the golden passports schemes, with an infringement procedure. Citing infringements against the treaties of the EU, the Commission said the scheme was incompatible with the principle of sincere cooperation while undermining the integrity of the status of EU citizenship.
Monique Agius
19:13 The wage supplement, paid quarantine leave and teleworking schemes, were among the measures that the government took during the first wave, Abela notes.
Monique Agius
19:11 He explains that the government's strategy was to stabilize the situation before focusing on the future.
Monique Agius
19:07 Abela claims that the Opposition Leader and "his friends in civil society" are working to put Finance Minister Edward Scicluna in prison, in a veiled reference for a magisterial inquiry into the the concession deal of three state hospitals.

"We are the movement of the workers and employers," he says.
Monique Agius
19:01 The prime minister says that while the government made mistakes, it always was focused on the issue at hand, taking timely decisions.
Monique Agius
19:00 Abela hails his once leadership rival Deputy Prime Minister and Health Minister Chris Fearne as the "best health minister" this country has seen.
Monique Agius
18:59 Abela notes that foreign nurses are needed.
Monique Agius
18:58 Abela shares an anecdote saying that youths at the gym told him not to close them down. He mentions a number of various opinions he heard relating to possible measures to curb the spread of the virus.
Monique Agius
18:56 On the restrictive measures announced on Monday, Abela says that the 'government did not go overboard but imposed necessary measures'.

"I know that we hurt those who own bars. But at this moment this measure is necessary," he adds.
Monique Agius
18:56 Speaker Farrugia intervenes saying that a point of order can only be made on procedural matters, asking Abela to continue with his speech.
Monique Agius
18:53 PM Abela claims that Grech did not follow mandatory quarantine rules.

Grech rebuts saying that this is not true and he was never subjected to mandatory quarantine.
Monique Agius
18:52 He says that this is not the time to score political points during a pandemic, urging national unity on the issue.
Monique Agius
18:52 €111 million were paid in allowances, he says.
Monique Agius
18:51 Abela thanks health care workers as he says that the public expenditure on wages of health care workers is currently €309 million, while next year €331 million will be allocated.
Monique Agius
18:49 The prime minister notes that while Opposition Leader Bernard Grech who said that he trusts the Superintendent of Public Health Prof. Gauci but at the same time "wants" a committee to scrutinize her work.

Grech proposed an action team to work on the pandemic.
Monique Agius
18:47 Abela says that the first Vice President of the European Commission Frans Timmermans has hailed the reforms undertaken by the government.
Monique Agius
18:45 Abela refers to the 2019 political crisis following arrests in connection to the murder of journalist Daphne Caruana Galizia, he says that the country moved on to serene times.

He says that he apologises for any mistakes made, before quickly adding that Malta has made various reforms related to governance and the rule of law. These reforms have drawn praise from otherwise institutions that were critical towards Malta.
Monique Agius
18:44 The deficit is not decreased through taxes, he says, adding that the government has a different economic model. Abela draws parallels between the 2009 global financial crisis and the current pandemic.

Abela says that this is double the funds allocated for Malta in the last EU budget.
Monique Agius
18:33 PM Abela says he met a businessman who traditionally voted the Nationalist Party. He claims if the "PN was capable of doing good as much as it is capable of doing harm, no one will bring them down from government." 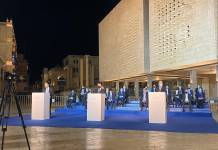