A Maltese doctor is involved in the world’s largest randomised clinical trial for treatments for coronavirus patients.

Dr Miguel Debono told Newsbook.com.mt that he’s involved in the “RECOVERY” trial – the largest trial of its kind. Over 8,000 patients have been recruited. More than 100 hospitals are involved in the project which is being led by Oxford University. Researches are evaluating the effectiveness of five different treatments.

Dr Debono lives in the UK and is a consultant at Sheffield Teaching Hospitals.

However, everything changed when the virus hit.

Dr Debono is happy because his patients now have the opportunity to be treated for the virus. Before they were given oxygen and were treated for secondary infections. They weren’t receiving a specific treatment for the SARS-CoV-2 virus (the virus causing COVID-19 disease).

Nevertheless, the study is in its early stages so one would need to wait for its results to find out if the treatments are actually working or not.

Dr Debono graduated from the University of Malta. He went to the UK to gain more experience in endocrinology. He was unlikely to get the necessary experience to specialise in this field in Malta due to the island’s small size.

From studying cortisol to facing a tsunami of change

Until a few months ago he was analysing saliva samples for cortisol. This test was being done to determine of a person was producing enough of the hormone which is needed for metabolism and helps control blood pressure. Cortisol levels are normally analysed through blood tests, however Debono is evaluating whether tests can be carried out in an easier and cheaper way.

Debono described the change brought about by the coronavirus as a “tsunami”. Things changed quickly in a short amount of time. Patients are being asked to stay at home. A number of doctors are also staying home because they have health conditions which put them at risk. Nevertheless, Dr Debono said that their hospital isn’t being impacted negatively by staff shortages.

Debono thinks of his kids and the risks he’s facing

While he’s driving to the hospital Debono thinks of the risks he’s facing. In the beginning he used to also think of his kids and wonder about their future if something were to happen to him. However, when he arrives at the hospital he manages to concentrate and do his utmost. He spent his whole life preparing to be a doctor. He’s not about to give up now.

“A number of my colleagues never experienced anything like this and they’re older than me.”

Things changed drastically at his hospital. Priorities shifted towards the treatment of COVID-19 patients. Surgeons are only carrying out urgent operations. Plastic surgeons and ophthalmologists are also pitching in to help with coronavirus patients.

“Our lives changed. We don’t know how long the situation is going to last,” said Debono. At the moment he’s in charge of a ward for COVID-19 patients. The majority of his patients are over 60 years old.

He said that he gets emotionally when he meets his patients. He explained that some patients would have multiple health complications. One wouldn’t really be able to help them. He’d have discussions with them about how aggressively they want to be treated. For some patients, the best he can do is to ensure that they’re as comfortable as possible.

Dr Debono described the moment when a patient asks if they have the virus. He said that their face changes when they’re told they tested positive.

However, he sometimes had patients with serious lung problems but they somehow managed to pull through. A considerable number of patients get discharged.

“You’d look at their X-Rays and say that it’s a miracle that they are still alive,” said Debono.

Unfortunately, others aren’t so lucky.

In response to the pandemic, a number of agencies providing research funds advised researchers to suspend projects which are too risky. Since Debono was collecting saliva samples, his project was one of those which had considerable risks.

Dr Debono said that many academics are trying to carry out work related to the coronavirus. “Anything you do will be new,” said Debono. Asked about whether or not any research related to COVID-19 could be carried out in Malta, Debono said that there wasn’t any doubt about it. He believes that there are researchers capable enough for such a feat in Malta.

Like many others, Dr Debono is also predicting that life will change even after restrictive measures are lifted. From a researcher perspective he also thinks that changes will be made. He thinks that more investigations will be conducted from homes so that people would avoid having to go to hospital. He also thinks that there will be more studies about strategies to make patient management more efficient.

Asked about what advice he would have given his past self in light of the pandemic, Dr Debono said that he’s appreciating more how important it is for one to keep healthy and to exercise.

At the end of the day, Dr Debono said that he’s happy with his profession and that he’d recommend it to any student. 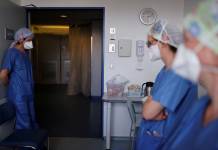 Watch: “Every one of us has a part to play in this situation” – Dr Chris Fearne #weareallinthistogether

Coryse Borg   June 3, 2020
BMIT Technologies and EBO.ai have entered into a strategic partnership that will allow BMIT Technologies to offer an effective and innovative customer support tool developed by EBO.ai to its customers, worldwide.

Reuters   June 4, 2020
Meghan, Britain's Duchess of Sussex, has spoken about events following the death of George Floyd saying she was sorry that children had to grow up in a world where racism still existed and that current events in the United States were "devastating".

Monique Agius   June 2, 2020
A group of residents at the Marsa Initial Reception Centre have staged a protest demanding their freedom on Tuesday.