Malta will free itself from the pandemic, Prime Minister and PL Leader Robert Abela said on Monday evening.

In a recorded statement aired on PL’s media outlets Abela said that the Maltese were experiencing a particular time. He said that now was the time for people to come together and not flaunt their political colours.

Abela said that people were being called upon by their country to work together. He said that he was hopeful that the people of Malta would heed his appeal.

“This is modern day freedom. Freedom from this pandemic which once achieved will allow us to achieve and dream more. It’s a victory which will be marked as a victory of Maltese and Gozitans as one people,” said Abela.

Abela said that he was proud of his country. He also thanked for those helping out in the situation. 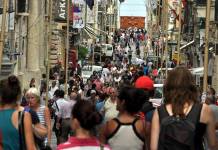