The EU should shop channelling funds to Libya to manage immigration and train its coastguard as the violation of the human rights of migrants and asylum seekers continues, MEPs from the Civil Liberties Committee insisted today.

Committee MEPs held a debate with representatives of the European Commission, Frontex, the UN High Commission for Refugees, the Council of Europe and various NGOs, and a majority insisted that Libya could not be deemed a safe country for the disembarkation of people rescued at sea.

The debate is occurring days after Malta refused to disembark a group of migrants who found themselves in distress in Malta’s search-and-rescue zone, with a private vessel – reportedly following the Maltese authorities’ instructions – picking them up and taking them back to Libya. By then, five of those on board had died, and a further 7 went missing. The incident prompted civil society group Repubblika to file a criminal complaint over the matter.

During the debate, speakers acknowledged the challenges faced by Malta and Italy as the front-line countries receiving the bulk of those fleeing Libya. So far, 3,277 people arrived in Italy by sea, and 1,135 arrived in Malta.

They underlined the need to review Europe’s common asylum system, with a focus on solidarity on member states and the respect of international obligations. But while some insisted that member states were entitled to protect their borders, others criticised the closure of ports due to the Covid-19 pandemic.

German MEP Cornelia Ernst specifically singled out Malta, accusing it of violating international law by closing its ports to asylum seekers and questioning how the European Commission was going to respond. She also cited reports suggesting that Malta had reached a secret agreement with Libya to limit immigration, noting that this too was a violation of its international obligations. 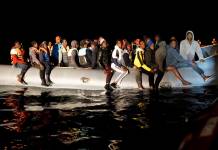