“Everyone loses their cool, even the Pope” Archbishop Charles Scicluna told couples that will be getting married this year during a special Mass organised for them.

During a homily delivered by Archbishop Scicluna on Saturday at St John’s Co-Cathedral, the archbishop referred to the incident on New Year’s Eve when Pope Francis admonished and slapped a pilgrim after she grabbed his hand and yanked him towards her. He later apologised for losing his temper.

Addressing the couples present, Archbishop Scicluna said that he wished them to be a star in the darkness, good news and a gift to each other.

He also urged them to find time and pray together as well as approach the sacrament of Confession.

Mgr Scicluna said that while he understands that they may lead a busy lifestyle, they should make time for each other and be present for one another. He reminded them of the importance of using courtesy words with one another such as “thank you”, “please”, and “forgive me”.

‘We need to accept the fact that conflicts happen. However one needs to be of the conviction that you met this person to arrive at better place,’ Archbishop Scicluna explained.

The special mass was organised by the Cana Movement. Another Mass is being organised on Saturday 11 January for which the couples that got married in 2019 are invited to. 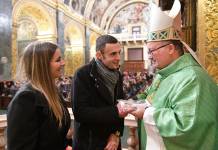 Nicole Borg   February 25, 2020
One does not usually expect the Pope himself to speak about carnival. Nonetheless, throughout the years, Pope Francis showed how laughter and humor are important to him.