MV Lifeline‘s Captain Claus-Peter Reisch presented the award which was given to him by the German Social Democratic Party for his humanitarian work.

In the hearing, two technical reports regarding the vessel were presented.  Defence lawyer Cedric Mifsud also requested that Reisch be allowed to travel to Germany and come back for the next Court session.

Reisch is being accused of ignoring instructions from Italian authorities who asked him to go to Libya, of driving an unregistered vessel and of entering into Maltese territorial waters without permission.  The Captain forms part of Lifeline, a non-governmental organisation which specialises in civil search and rescue.  MV Lifeline, together with Seefuchs and Sea Watch Vessel are all held in Malta without any official explanation. Sea Watch’s plane, Moonbird was also not allowed to fly from Malta.

The hearing of this case was adjourned for the 23rd August 2018.

10.24 The Court was asked to authorise the vessel’s crew members to re-load the vessel with fuel and carry out all the necessary maintenance work on said vessel.  Judge Mifsud accepted on the condition that this work was done in collaboration with the Malta Police Force.

10:17 Dr Martin Bajada testified about the digital research carried out on the vessel.

10:14 Reference was made as to how Claus-Peter Reisch was awarded by the Bavarian Parliament for his humanitarian work in favour of migrants.

10:10 The Defence requested that Reisch be allowed to travel.  The Judge accepted this request but stated that a €5,000 personal guarantee will have to be paid.

Today MV Lifeline‘s Captain, Claus-Peter Reisch’s case continued to be heard.  He arrived in Malta yesterday after having been allowed to travel to Germany. 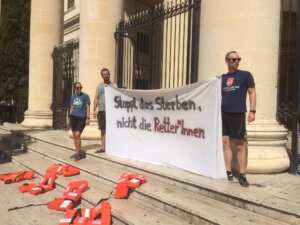 Last June, MV Lifeline entered Senglea with 234 migrants on board.  A number of these migrants have already been transferred to another nations, following an ad hoc agreement with several European Union member states.

Reisch, a 57-year-old German national, is appearing in front of Judge Joseph Mifsud after he was questioned by members of the Maltese Police Force.  He is being accused of ignoring instructions from Italian authorities who asked him to go to Libya, of driving an unregistered vessel and of entering into Maltese territorial waters without permission.

His defence is made up of Gianluca Cappitta, Neil Falzon and Cedric Mifsud.

Watch: ‘It’s a legal obligation to save those at sea’ – Lifeline Captain