A funeral service was held this afternoon for Frederick Azzopardi, a Nationalist Party MP who passed away last Saturday. He was 71-years-old.

The funeral was held at the Xewkija Parish Church at 4:30pm

The Azzopardi family asked that instead of flowers people are welcomed to make a donation to either Hospice Malta or to Friends of the Sick and Elderly.

Frederick Azzopardi was married to Carmen, and together they had three children.

He worked in the public service between 1969 and 1998. In 1997 he was elected deputy mayor of Victoria. He who was elected to parliament for the first time in 1998 and was re-elected in every election following that, served as the Government Deputy Whip and Parliamentary Assistant in the Ministry of Gozo. 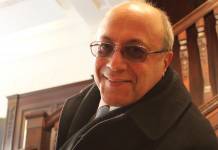 Newsbook.com.mt broadcasted the funeral live on its website. The funerl cortege passed through Victoria past Partit Nazzjonalista’s club in the locality and Soċjetà Filarmonika Leone.

Partit Nazzjonalista leader Bernard Grech paid his respects by placing flowers on the coffin when the cortege stopped in front of the party’s club. In a Facebook post, Grech remarked that Azzopardi considered politics as a mission to do good in people’s lives.