No new coronavirus cases have been reported in Malta in the last 24 hours, Deputy Prime Minister and Health Minister Chris Fearne announced on Sunday morning during a press conference.

The first case was reported in Malta on 7 March. Since then, 448 cases have been confirmed so far. Fearne announced that another 33 individuals have successfully recovered.

Fearne highlighted that the epidemic showed that Malta had a robust health service and that it had been well prepared for the outbreak with widespread testing and contact tracing and quarantine measures for those at risk of infection. The health minister reiterated that the aim had always been to have a river instead of a tsunami of cases which would overwhelm the healthcare system stretching it to its limits.

'I've always urged the public to cooperate in order to control the epidemic,' he says, adding that it was better to be 'over-prepared'.

The swabbing centres will remain open.
Monique Agius
11:58 The app for symptoms is completely anonymous, Prof. Gauci says.
Monique Agius
11:57 Prof. Gauci speaks about the development of vaccines. She says that the health authorities have showed interest in participating in wider trials. She highlights that it is not yet known whether one builds an immunity against the virus.
Monique Agius
11:54 Fearne says that the health authorities are looking at two different apps – a contact tracing app – which uses technology to identify those individuals who were at risk of contracting the virus. He says that while there is research underway, Malta was not in position to introduce this app. He says that once it is ensured that this was not a big brother scenario.

He explains that the app which will be introduced is for the user only and will not involve tracking.
Monique Agius
11:51 Fearne says that when the time comes the announcements will be made. He says that the epidemic is still ongoing in Malta since there are active cases. He mentions the possibility of asymptomatic individuals in the community who have not been tested so far.
Monique Agius
11:50 Question time.

Fearne warns against the second wave.
Monique Agius
11:38 If the trend remains the same, then the restrictions will be eased in a gradual manner. Not every sector will be affected in the same way, once the easing of the measures starts off.
Monique Agius
11:37 'It's true we're celebrating but the measures are still necessary,' Fearne says.

On Saturday one new case of coronavirus was confirmed while an elderly patient died of the virus. Another 26 individuals recovered from the virus bringing the number up to 249. 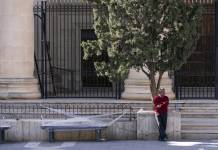