Making use of technological tools available should be a priority, Partit Nazzjonalista leader Adrian Delia said on Monday during the first press conference after the new shadow cabinet was announced. He remarked that with the current coronavirus pandemic, the country may choose to seize the opportunity and move on in a digital world.

During the press conference, Delia explained that the country is facing a public health pandemic as he referred to the recent declaration which empowers the Superintendent of Public Health who on some occasions has power than the Prime Minister himself in such situations. One should heed to the advice being given by the health authorities, Delia stressed.

The Opposition leader reiterated that at present the most important thing remains to safeguard jobs noting that many remain without any financial aid.

He also mentioned climate emergency as another priority for Partit Nazzjonalista.

During the press conference, Delia said that there was also an opportunity to look forward to the future and to a more digital future. He urged the government to make more use of artificial intelligence in the health and transport sector.

Delia said that Malta needs to be more proactive during the discussions being held at a European level on EU funds.

Earlier Superintendent of Public Health Professor Charmaine Gauci announced that 14 new cases of coronavirus were identified bringing the number up to 241. 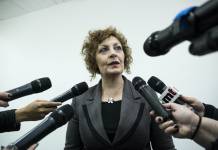