People are paying the price for the government’s corruption, Opposition leader and Partit Nazzjonalista leader Adrian Delia said on Wednesday evening during the TV programme Magħkom on NET Television.

Delia noted that the money which was lost due to alleged government corruption, could have gone into assisting businesses and people during this time of need. The Opposition leader highlighted that the country was entering into an economic crisis following the coronavirus pandemic. 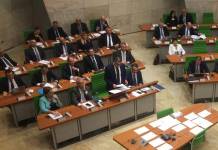 Replying to a question on the ongoing magisterial inquiry into the misuse of public funds by Cabinet members, Delia stressed that the public funds misused by the ministers and parliamentary secretaries could have been used by the government in such a time of uncertainty.

‘This government has ripped our country’s reputation apart,’ Delia maintained.

He explained that at this juncture the government should be helping the people living here and the businesses operating to get through this period. ‘These are millions of funds which could have been utilised now,’ he stressed, mentioning the privatisation deal of the three state hospitals and the Electrogas project, both of which have been heavily questioned.

Not doing enough to safeguard the vulnerable

The Opposition Leader lambasted the government for not doing enough to help those who are in poverty or at risk of poverty. He remarked that senior citizens did not benefit from the measures announced on Monday, adding that the a Partit Laburista-led government had lost its social conscience.

During the interview, Delia reminded how the Opposition had been critical of the economic model adopted by the PL-government which was based on importing foreign labour and increasing the population size. He explained that post-coronavirus, many of these workers had left.