The reopening of the airport should be decided by the Superintendent of Public Health, Professor Charmaine Gauci, Partit Nazzjonalista leader Adrian Delia said during an interview on Saturday morning.

Delia was interviewed on the party’s media by Illum editor Albert Gauci Cunningham.

The Opposition leader remarked that the party always adhered and supported decisions taken by the health authorities. When asked if he would have opened the airport had he been Prime Minister, Delia said that such decision lies with the Superintendent of Public Health.

Speaking about the negative impact the coronavirus had on the Maltese economy, Delia pointed out that some 11,000 are currently unemployed.

During the interview, Delia was also asked about employing a chief of staff with a salary of €35,000 – €40,000 and not informing party supporters who would also donate to the party. The Nationalist leader denied employing a chief of staff saying that there are two people employed within the office of the party leader – a secretary which takes care of his diary and a person who takes care of his office. Delia claimed that since he was appointed leader, the office had the “lowest” expenses when compared to previous leaders.

Delia urged the public to heed to the advice given by the health authorities, remarking that one may still contract the virus from the community. He noted that the mixed messages were being sent out by the government with Prime Minister Robert Abela being at odds with the Deputy Prime Minister Chris Fearne and Prof. Gauci.

Earlier on Saturday morning, Delia was interviewed on Newsbook Hour which was aired on 103FM – Malta’s Heart. 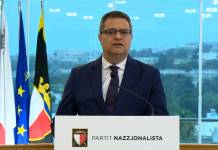