Repubblika, Occupy Justice and manueldelia.com organized another demonstration in Valletta asking for, among other things, the resignation of Prime Minister Joseph Muscat. Members of the family of assassinated journalist Daphne Caruana Galiza are participating in the demonstration.

The demonstration started from in front of Parliament at 4.00p.m. Protestors were shouting several slogans such as “Justice”, “Mafia” and “Barra”.

This is the most recent in a number of demonstration that civil society has been organising this past week. The Partit Nazzjonalista and other political parties have advised their supporters to take part in the demonstration.

18:00 Another protest was announced for tomorrow at 6pm.

17:35 Mark Anthony Sammut said that Joseph Muscat remains in power without any shame. He said that this even though his name was mentioned in the interrogations the Police made to Yorgen Fenech. He said that the Deputy leader of the Labour Party Chris Cardona and the Speaker of Parliament Anġlu Farrugia both said that they feel insecure under the leadership of Muscat.

17:20 Alessandra Dee Crespo addressed those working in Castille as “Assassins”. She asked why the Prime Minister Joseph Muscat is so attached to power. She also said that the Prime Minister and his people must already have a lot of information on the assassination of Daphne Caruana Galizia.

17:10 Rachel Williams also addressed the crowd. She thanked Daphne Caruana Galizia for exposing the corruption. She said that the biggest loss was suffered by her family. She called for the Maltese and Gozitan public to work together. She also thanked the countless journalists, including those of Newsbook.com.mt that are working hard in order to secure that justice is served.

17:00 16 year old student Eve Borg Bonello addressed the crowd by saying “Joseph Muscat is a thief”. She said that this is because he stole Maltese youth’s futures. She appealed for the Prime Minister to resign because:

16:45 Ranier Fsadni spoke in favour of the Constitution. He said that Malta needs to have a Prime Minister that respects the Constitution. He insisted that all those present have no faith in the Prime Minister. In a direct address to Muscat, Fsadni asked him how could he have faith in him when day after day more corruption from members of cabinet is announced. He appealed for unity, because that is what guarantees a positive and forward movement.

16:40 Manuel Delia addresses the crowd with the call: “Joseph Muscat must leave now!” He thanked the countless journalists around the world that are following the demonstration. He them that Malta is more than just Joseph Muscat, and its real patrons are the ones present protesting against corruption.

16:35 More photos of the crowd gathered in Republic Street:

16:30 The crowd reaches the stage while Marco Masini’s Vaffanculo plays on.

16:00 The crowd starts moving from in front of Parliament to the Maltese Courts where the speeches will be held. 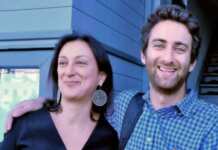 15:35 A number of people are already gathering in front of Parliament