The PN leadership election has been held today.

00:00 That is it for today. Thank you for following this live blog.

23:57 “The first thing I will work on as PN leader is unity. This political party will be the party that everyone can feel part of. I want a party that is organized, credible and united.” – Bernard Grech

23:51 Grech said the PN should reach out to those who this evening feel disappointed as their choice was Adrian Delia. He said that he wants those who did not vote for him to come forward and be party of the PN family.

“As from tomorrow all hands on deck”

23:47 When asked about his position on David Agius and Robert Arrigo, Grech said that he is ready to work with them and with all the other MPs.

23:46 “I do not have the answers for everything but with social dialogue we will.”

“I will not take advice from the PL”

23:45 When asked about the PL’s reaction, following the PN’s leadership election, Bernard Grech said that without any doubt he will not follow the advice of the Labour Party and mentioned how the PL did not want him to be the PN’s leader.

23:44 He also said that there are MPs who are ready to give up their parliamentary seat for him. Grech said he will not mention names for now.

23:42 “I have received messages from several PN MPs who have congratulated me and I invite others to come forward so that we can together discuss the future of the PN. I also want Adrian Delia to be part this journey,” said Bernard Grech.

23:27 “As from tomorrow we need to unite this party and start working towards a general election to make this glorious party a truly alternative government,” concluded Bernard Grech.

23:25 He has also expressed his gratitude towards his wife who has always supported him. He thanked his children who right now present on stage.

23:21 “Today’s result means a huge responsibility for me and I welcome Adrian Delia’s statement that he will for for the good of this party. I thank him for expressing his loyalty towards me,” – Bernard Grech

23:20 “As a political party we have the moral obligation to safeguard the health of the elderly in view of the pandemic,” said Bernard Grech.

23:19 He has also thanked the elderly party members who due to the coronavirus pandemic could not participate in this leadership election.

“We need to restore normality in this country”

23:18 Grech said that this is the party for those people who want to restore normality in this this country.

23:17 “Today the PN has won” – said Bernard Grech. He said that he will work to win the trust of many who are part of the PN family and maybe have not voted for him.

22:54 President of the PN General Council Censu Galea will read the official result. There is a difference of 7,041 votes between Delia and Grech.

Chairman of PN Electoral Commission has just announced that Adrian Delia got 5,622 votes – 30.7%

21:20: Adrian Delia said that all the party members who have voted believe in the democratic process. It was a flawless election said Delia.

“I do not believe I have lost but today the PN has won” – Adrian Delia.

“I will make sure that all that I have experienced during the past 3 years will not be faced by the new leader” – Adrian Delia.

21:00 Adrian Delia has just arrived at PN HQ. He said he will give his statements during a press conference.

20:26 Following the initial indication in the PN’s leadership election the Labour Party has issued a statement saying that the establishment within the PN has won – the same establishment that has put aside people’s interests election after the other.

The Labour Party said that with Bernard Grech as leader of the PN th party will go back to its roots were as a nation we bow down to international pressure especially in connection to illegal migration. The Labour Party also said that the PN has a leader without a vision for this country.

20:25 On Facebook Adrian Delia wrote that the PN is still a strong political party and that he will continue working for a better and stronger PN.

20:20 If Grech wins by over 65% the vote would reflect the trend of votes in the Parliamentary Group and General Council.

20:15 This newsroom is informed that Bernard Grech will win by over 65% of the vote.

20:10 Newsbook.com.mt will continue updating you with the latest developments and with the official result which will be announced by the PN’s Electoral Commission.

20:09 On Facebook Bernard Grech has thanked all party members who have shown trust in him.

19.20 In comments made to Newsbook.com.mt PN secretary-general Francis Zammit Dimech welcomed the high turnout, and expressed his satisfaction at the way the party handled an election in the midst of the Covid-19 pandemic.

He also expressed his willingness to continue serving as the party’s secretary-general after the election – irrespective of who wins – for as long as the party leader would wish him to.

18.25 The process as seen from the lens of the PN. The journalists present, including our own correspondent, have been asked to follow proceedings from a designated room.

17.25 The opening of sealed ballot boxes has started at the party HQ, paving the way for the counting of votes. The first phase, as is the case with national elections, will be to separate the cast votes into bundles of 50.

17.00 Newsbook.com.mt can confirm that internal polling organised before early voting began suggests that 74% prefer Grech to Delia. Another poll held earlier this week among those who had not yet voted again indicates that Grech would be the preferred choice.

16.00 The polls are officially closed. The party’s electoral commission reports that turnout has reached 85%, with 18,378 of the 21,499 eligible tesserati choosing to cast their vote.

14.00 Voting in Gozo has concluded at 2pm, with the party’s polling places in Malta remaining open for two more hours. Turnout in Gozo has been 88%, with 1,513 out of 1,719 eligible voters casting their vote in the only Gozitan polling place, the PN club in Sannat.

12.30 5% of eligible voters have showed up to vote by noon. Though of course, one must keep in mind that the vast majority have voted early, bringing the turnout up to 81%.

12.04 The PN communications team now sends Grech’s voting photo-op. Grech, who cast his vote at the Naxxar PN club also appears to be smiling, though opting for a face mask instead of a visor obscures this fact.

11.40 Photo-op time: the PN communications office sends the press a photograph of a smiling Adrian Delia casting his vote. Delia cast his vote in the Siġġiewi PN club, one of various party clubs serving as polling places.

08.30 On his part, Grech highlighted that the PN was the party which the Maltese always turned to in trying times, and said that the moment for this to happen again was drawing near. He insisted that as party leader, he would strive to write a new chapter in the party’s history.

08.15 In an election day message on Facebook, Delia emphasised that the party was bigger than its leader and its structures, but was ultimately made up of its tesserati. The message reflects his stated reason for refusing to step down in the face of mounting dissent within the party structures: that the tesserati put him there, and only they should be able to force him out.

08.00 The polling booths open, but the vast majority of the 21,499 eligible voters – 76% of them to be exact – have made use of the five days of early voting, held in part to minimise the risk of crowding in the midst of a Covid-19 pandemic. Among those who have not done so are the two leadership candidates: early voting would have denied them the traditional voting photo-op. 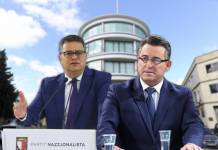