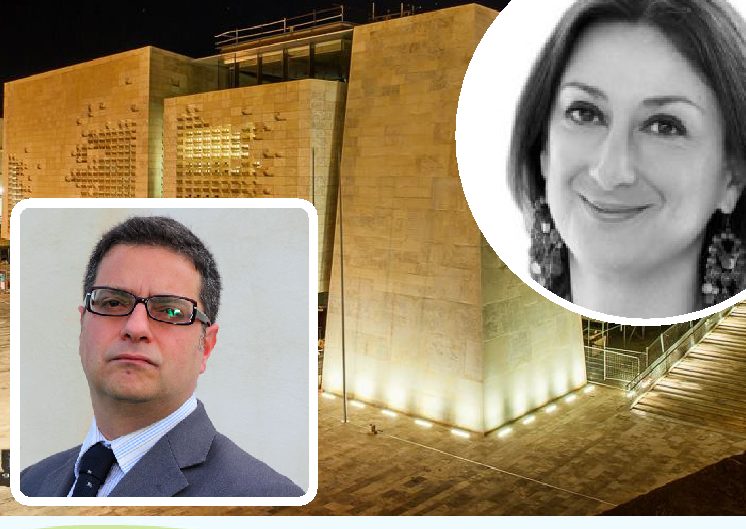 The House of Representatives Thursday met to discuss a motion tabled by the Opposition calling for an independent inquiry into the murder of journalist Daphne Caruana Galizia. The motion was presented as a private members’ motion by Opposition leader Adrian Delia and MPs Karol Aquilina and Robert Cutajar.

Meanwhile, earlier on Thursday, the Partit Demokratiku, also part of the Opposition Block in parliament presented an amendment to this motion, proposing to widen the scope of the investigation to include the murders of Karin Grech and Raymond Caruana.

Newsbook.com.mt will be updating with live blogs.

16:40 Minister Justyne Caruana asked to be excused from the sitting since she was named in the motion as the wife of one of the police investigators. She said that she was doing this to ensure that the democratic process is allowed to proceed unhindered. She added that she wanted also to comfort her children that this unwarranted attention was only due to the assiduous work she and her husband carry out for the good of the country.

16:45 PN MP Karol Aquilina remarked that the Constitutional court itself had said that the involvement of the partner of a government minister in the investigation was inappropriate. He said that government has yet to appoint an inquiry as requested by human rights lawyers for the Caruana Galizia family. The duties of government to investigate and to protect were outlined by these human rights lawyers. When still government refused to budge, the PN opposition took up the cudgels to ask parliament to make government act with responsibility. Condemnation is not enough said Aquilina and part of the house wants action, the other part does not. He said that the motion calls for the resignation of the Attorney General and the Commissioner of Police since these fell short of their duty.

16:52 Aquilina said that the Minister for Justice seems not to understand the gravity of the situation and the seriousness of the position of government. This was the most sensational and serious crime that was perpetrated in Malta in the past 30 years insisted Aquilina where a journalist was endangered to the point where she was murdered. Our secret services, he said, were tailing the suspects so how come they did not try to protect the journalist. He asked if, following the murder, if the failings in security to journalists have been stepped up.

16:55 Aquilina said that fairness dictated that the inquiry should be well resources, given a definite time frame and should report to parliament. He said that it is not right that parliament should have members who do not want the truth to out. He appealed to government to do its part to show that it wants the truth to become manifest

17:07 Claudette Buttigieg steps down as deputy Speaker to deliver her speech and her place is taken by Glenn Beddingfield.

17: 13 Claudette Buttigieg (PN) said that this motion presents an opportunity to all MPs  to show that they are mature and responsible and not a set of belligerent talkers. She said that the public is fed up with squabbling MPs. “Under our watch a journalist was murdered, let us show we care” said Buttigieg. She said that it would be a great pity if the debate were to resolve itself into a technical hair-splitting exercise. She asked if parliament has the political will to see that the case is truly solved. Buttigieg said that it is absurd to say that the opposition wants hamstring investigations. She appealed to her colleagues to address matters of substance and prove those who are seeing MP as puerile and spineless, wrong.

17:35 Edwin Vassallo (PN) agreed with Beddingfield that may be those who do not want the truth to out. He said that in truth, government is treating this murder as business as usual. He said that the murder is linked to the journalist’s uncovering of secret accounts which sought to cover up millions of euros. The Opposition felt it necessary to move this motion since it felt that society is being short changed on the truth. “For the opposition, unlike government, it is not business as usual” thundered the Mosta MP. Political responsibility needs to be shouldered, concluded the MP.

17:45 Rosienne Cutajar (PL) said that government affirms its faith in institutions and echoed Byron Camilleri (PL) saying that an investigation is a question if when not if. She said that the Opposition used the murder for political divisiveness. The murder was a shocking event and no one deserved to die in this way. She said that the motion raises doubts if everyone is interested in the truth or if the prime importance is scoring political points. There was never a case in which the investigations gave results so quickly, said Cutajar. This, she said, begs the question as to why should politicians interfere when the institutions are giving results.

17:57 Marlene Farrugia (PD) said that a public investigation is a right not only of the Caruana Galizia Family but also of the general public. Daphne was murdered since she had placed her finger on corruption and was living in a climate where it was perceived tha tthe rule of law could be flagrantly impugned. She moved a counter-motion to set up an independent ‘Truth and Justice Commission’ to investigate political murders such as those of Daphne Caruana Galizia, Raymond Caruana and Karin Grech.

18:08 Edward Zammit Lewis (PL) said that what happened (the murder of Daphne Caruana Galizia) was unacceptable even if her pen often hurt people. he asked if this motion implied that the magistrates were under political pressure. He said that government needs to persuade the people that it does care and that all MPs want the truth to be known. He expressed agreement with the legal advice of the Attorney General who quoted an eminent jurist that further inquiries need to wait until the current inquiries are concluded. He said that the structures need to be strengthened since most criminality is trans-border and the rule of law prevails. He ended with the iconic ‘Malta l-Ewwel u qabel kollox’.

18:15 Jason Azzopardi (PN) said that magisterial inquiry is by nature secret and its contents cannot be divulged, imploring government not to continue misleading the public on this matter. He said that it is disgusting that OPM officials, with the consent of the Prime Minister, allege that Daphne was killed by her son and no condemnation of these words was forthcoming. He noted the message given by the multiple clearings of the Daphne Memorial was that journalists are fair game. This shows manifest bad faith, said Azzopardi.

18:27 Robert Abela (PL) said that this legislature has, for the PN, been marked by a negative approach which shows that the opposition cannot move forward. He said that the rule of law means that laws are the same for all and need to be respected by all. He said that the motion was illegal. He said that while Jason Azzopardi is asking for a public inquiry, the motion asks for a parliamentary inquiry. He accused Azzopardi of wanting to liberate the three accused of the murder of Daphne and of obtaining information using professional privilege.

18:38 Owen Bonnici (PL) said that a society that respects the rule of law cannot but condemn the barbaric attack Daphne Caruana Galizia. He expressed great admiration to the police for carrying on investigations when their own lives were at risk. He said that this discussion was happening after government gave a concession to have Thursdays devoted to topics by the opposition. He cited other cases where an inquiry was not held before the magisterial inquiry was completed. Owen Bonnici presented a counter-motion which added that the inquiry should be held after the magisterial inquiry is terminated.

18:48 Leader of the Opposition Adrian Delia said that the government amendment to the motion presented was an in extremis attempt to find a way not to support the motion. He said that the murder of Daphne Caruana Galizia was the murder of a human being, a Maltese mother and whose assassination shows disparagement of the right to life. An embodiment of the right to free speech, Caruana Galizia’s murder show that the country is moving away from the basic tenet of the protection of freedom of expression.

18:57 Delia said that the involvement of the husband of Minister Caruana in the investigations was condemned not by the opposition but by the constitutional court decision who said that this involvement may throw the institutions under a pall of suspicion. He said that this sentence nullifies all the arguments made by government in parliament this evening. Quoting the Inquiries act, Delia said that motion presented by the Opposition falls squarely in its parameters and aims to give justice to the people. This renders all arguments made by government as tending to cover up the truth. In a normal country, journalists are not killed for writing on their findings, said Delia but if this happens, resignations are in order. “But we are not living in a normal country, are we” said Delia.

19:06 Delia said that the call for the resignation of the Attorney General and the Commissioner of the Police is being repeated as these are ‘nothing but weak and pliable tools in the hands of government’. Referring to the murders of Karin Grech and Raymond Caruana, Delia said that under Labour governments impunity reigns as consequences of dastardly acts go unpunished. He said that the Commissioner of Police and government were obliged to protect a person who was in manifest danger. He concluded that the Opposition wants to know if there was a possibility that Daphne could have been protected.