Government benches are busy this morning in parliament in what is nominally a debate about the investigations on the murder of Daphne Caruana Galizia. The debate is being conducted only from the government benches since on Monday evening, the PN opposition walked out of parliament in protest. Leader of the Opposition Adrian Delia said that the opposition will not participate anywhere where the Prime MInister sets foot, until he resigns, maintaining that he should resign immediately. In his speech yesterday, Muscat, who pulled a fast one and changed the parliamentary agenda to the debate on the murder, Muscat gave no new information and spke at lenght on his own achievements.

1145: Alex Muscat said that the mastermind and the executioners were all found and justice must take its course. There is a lot of genuine anger and people have a right to protest but not with violence.

1115: Minister Owen Bonnici said that the PM was instrumental in the resolution of the case. Minister Michael Falzon accused the oposition of sedition and pushing the state to the limit. He said that he had been pelted by egges and urine by member of the opposition.

!000: So far three speakers have made statements from the government side. In what is turning out to be something of a festschrift for Muscat, with all speakers praising Muscat fulsomly, the main subject of the ‘debate’ is being marginally treated. Minister Michael Falzon apologised to the word ‘rubbish’ out of respect to the word. Glen Beddingfield attacked the media for what he said was ‘fake news’. Minister Ian Borg praised Muscat for his able leadership and way in which the Caruana Galizia investigation was handled. 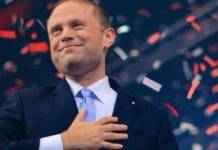 Reuters   July 2, 2020
Trudeau and his family are based in a large house on the grounds of Rideau Hall, the residence of Governor General Julie Payette, the official representative of head of state Queen Elizabeth. Rideau Hall sits on an 88-acre (0.35 square km) wooded estate.

Monique Agius   July 2, 2020
The figures were tabled in Parliament by Home Affairs Minister Byron Camilleri in a reply to Opposition spokesperson for justice Jason Azzopardi who asked for the quotations.