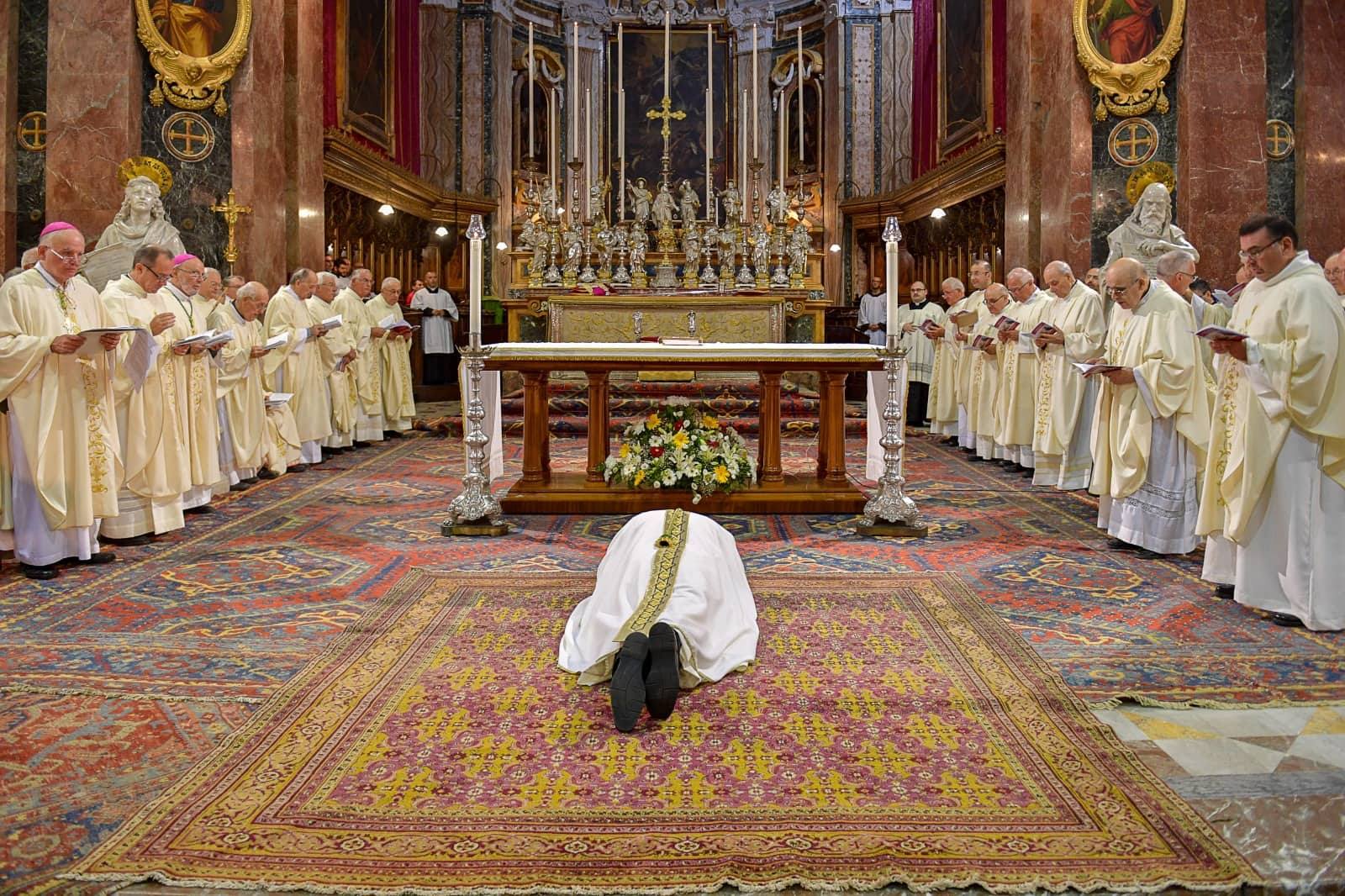 “I’ll keep you in my prayers so that you may always have the strength to be a good father who cares for, loves, and cherishes his children”.

So prayed Archbishop Charles Scicluna during the homily in the Ordination mass of Auxiliary Bishop Joseph Galea-Curmi at the Mdina Cathedral. He also wished him strength in proclaiming the good news to the poor, healing broken hearts, releasing the oppressed and in proclaiming freedom for the prisoners.

The Archbishop thanked Mgr. Joseph Galea-Curmi for accepting the call to his new mission. He also thanked the people that have led to this calling for Mgr. Galea-Curmi to become a successor to the Apostles, as he, like them, is called to lay down his life for the sheep.

The Archbishop thanked the new bishop’s late parents, Paul and Josette, who taught him to cherish his life with love. He said that this is due to their exemplary marriage which brought him and his siblings up with a lot of love. He also thanked the St. Joseph the Worker parish in Birkirkara where Bishop Galea-Curmi was born and raised, and the Catholic Community of the Annunciation in Balzan where he has been serving for a number of years.

Mgr. Scicluna said that the Bishop’s fatherhood is not one that comes cheaply. He referred to what Saint Paul said in his Second Epistle to the Corinthians about how humanity’s letters of commendation should not be written on paper, but rather in their hearts and manifestly declared through the spirit.

Mgr. Scicluna went on to say that one must truly appreciate the call for an Apostle, who imitates our Lord. The Archbishop explained how the Bishop’s mission is a clear and true sign of Jesus’ presence among the people.

The Archbishop referred to the hymn in the readings for the feasts of Spiritual Shepherds which names shepherds who go about their duties in a manner favoured by the Lord as Bonus Altor. Altor is the father who cares for his children with love.

Mgr Galea-Curmi blessed the assembled congregation. As a concluding message, the new Bishop said that it is truly important to cherish life right from the start. He also said that it’s important that people love each other through words and actions.

The kiss signified the union that exists among the bishops.

Assigning his place among the con-celebrants

The newly ordained Bishop was invited by Mgr Scicluna to take first place among the con-celebrating Bishops.

The Conferral of the Episcopal Insignia

The Laying on of Hands

This is the heart of the rite of Ordination. The action of the laying on of hands is ancient; its roots are found in the Old Testament. Archbishop Scicluna placed the Bible on Mgr Joseph Galea-Curmi’s head. The new Bishop was then anointed with chrism oil.

The Litany of Supplication

The Bishop-elect prostrated himself, all in the congregation kneeled and the litany was
sung.

The Papal Bull is read

The Papal Bull has been read, by which Pope Francis appoints Mgr Joseph Galea-
Curmi as Auxiliary Bishop.

The Bishop-Elect was brought in front of the Archbishop, along with two other priests, and one of the priests asks the Archbishop to ordain Galea-Curmi.

The Ordination Mass is being presided over by Archbishop Scicluna. The co-ordaining Bishops are Mgr Paul Cremona O.P. Archbishop Emeritus of Malta and Mgr Mario Grech, Bishop of Gozo. Archbishop Alessandro D’Errico and Bishop Paul Darmanin are also present.

The new Auxiliary Bishop’s Ordination Rite starts after the proclamation of the Gospel.

You can listen to the Mass with commentary on RTK 103FM.

“We buried my mother on August 4th”