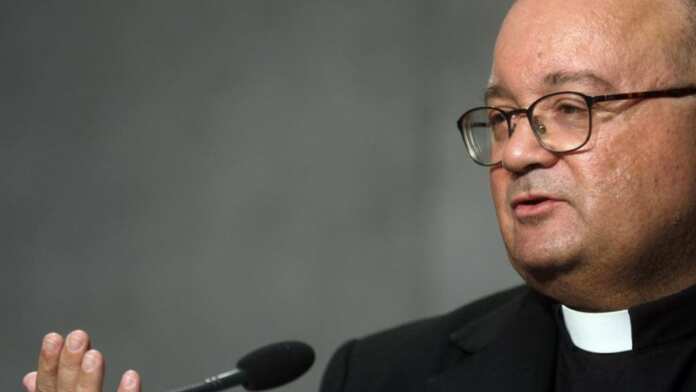 “We will lay down our lives for the flocks entrusted to us,” said Archbishop Charles Scicluna while giving his presentation at ‘The Protection of Minors in the Church’ summit at the Vatican which started today. He spoke of the need for better streaming of applicants to the clergy, as well as better formation and access to information regarding reporting and addressing the issue of sexual misconduct in general, and the abuse of minors in particular.

Mgr. Scicluna also said that “it would be a great sin against the integrity of episcopal ministries to hide facts indicating deficits in the lifestyles” of potential members of the clergy. The Summit will go on for three days with the Pope calling the world’s Bishops to the Vatican with the idea that the Church must send a clear message of its commitment to the protection of minors from sexual abuse.

While quoting Pope Benedict XVI, Mgr. Scicluna followed up claims of hiding potential clergymen’s lifestyles from the Pope. “It cannot be denied that some of you failed to apply long-established norms of canon law to child abuse,” said Pope Francis’ predecessor, also stating that “serious mistakes were made” in response to allegations, citing “grave errors of judgement” and “a failure of leadership”.

READ: ‘The Protection of Minors in the Church’ summit starts today

Starting his address with a preemptive quote from the Gospel of St Luke: “Everyone to whom much is given, of him will much be required. And of him to whom men commit much, they will demand more.” The Archbishop reminded that Bishops have been entrusted with the care of the congregation and the clergy with the sacred duty to protect them, and to ensure that justice is forthcoming in the case of abuse.

When it comes to reporting sexual misconduct, the Archbishop went into detail on the delicate balance between Canonical and State Judicial proceedings. Speaking of Dioceses and Religious Orders, Mgr. Scicluna said that it is essential that the public know of established contact persons. Already established protocols need to be respects, and civil and domestic laws must be obeyed, he said.

The Archbishop also detailed that every allegation should be investigated by experts with no delay, saying the the introduction of review boards has so far been beneficial. When it comes to Bishops tackling the issue, doing so in a Synodal or Collegial setting was said to be able to give them the energy to reach out to victims, clergy, the community and society in general.

Mgr. Scicluna spoke of the responsibility of Bishops and Religious Superiors to encourage exercises of spiritual renewal among priests to rediscover the joy of ministering to the flocks in the family of the Church. The long-term issue of prevention of sexual misconduct in general, with minors in particular needs to be embraced by Stewards, with more documents on human formation being studied and implemented thoroughly. Information must also be provided and accessible, giving attention to any potential for exploitation and violence.

He spoke of the importance of “a just an balanced understanding” of the notions of celibacy and chastity of priesthood which “should be underpinned by a profound and healthy formation in human freedom and sound moral doctrine”.

Ending with a quote from Pope Francis in 2018, the Archbishop reiterated: “It is essential that we as a church be able to acknowledge and condemn with sorrow and shame the atrocities perpetrated by consecrated persons, clerics and all those entrusted with the mission of watching over and caring for those most vulnerable.” Let us beg for forgiveness for our own sins and the sins of others. An awareness of sins helps us to acknowledge the errors, the crimes, and the wounds caused in the past and allows us in the present to be more open and committed along the journey of renewal and conversion.”

Monique Agius   May 24, 2020
We have emerged quickly from a public health emergency, Partit Laburista leader Robert Abela said referring to the coronavirus outbreak in Malta, on the party's media during the weekly interview.

Sephora Francalanza   May 26, 2020
The President of the European Commission Ursula von der Leyen will be presenting a recovery package in an extraordinary session on Wednesday.

Compilation of evidence against Yorgen Fenech to continue on 1st June

Sephora Francalanza   May 26, 2020
The compilation of evidence against Yorgen Fenech, accused of complicity in the assassination of journalist Daphne Caruana Galizia, is to resume on Monday, 1st June.

May 24, 2020
We use cookies to ensure that we give you the best experience on our website. If you continue to use this site we will assume that you are happy with it.OkCookies Policy