Archbishop Charles Scicluna announced the details on liturgical celebrations which will resume from the 13th of June.

The Archbishop said that the precautionary measures to be implemented have been discussed with the relevant authorities.

12:34 The interview ends here. Thank you for following this live blog.
Amy Borg
12:33 Archbishop Scicluna said that on behalf of the Archdiocese of Malta, Fr Andre Zaffarese is liaising with the health authorities and Fr Daniel Sultana is liaising on behalf of the Diocese of Gozo.
Amy Borg
12:30 Archbishop Scicluna said that they prefer for liturgical celebrations to be held outdoors rather than indoors.

An interview led by Fr Joe Borg will soon commence.
Amy Borg
12:10 Archbishop appealed to the public to cooperate with the Church Authorities to make Mass celebrations a positive experience once again and not a place where people get ill.
Amy Borg
12:09 Discussions will also be held with Parish priests.
Amy Borg
12:08 Social distancing, washing of hands and the use of face masks and visors will be enforced, said Archbishop Scicluna.

These measures will also be implemented during communion.
Amy Borg
12:06 The Archbishop said that the precautionary measures to be implemented have been discussed with the relevant authorities.

Depending on the size of the church, people will be allowed to enter for mass.
Amy Borg
12:06 Scicluna has announced that liturgical celebrations will recommence on the 13th and 14th May.
Amy Borg
12:03 Archbishop Scicluna is addressing the press conference.
Amy Borg
11:52 An interview with the Archbishop, led by Fr Joe Borg will follow.
Amy Borg
11:51 Archbishop Charles Scicluna is expected to deliver a press statement at 12:05 pm.
Amy Borg
11:50 Good morning. Welcome to Newsbook.com.mt live blog.
Amy Borg
Mass to resume in mid-June 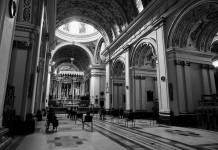 Watch: We’ve received the gift of life, wisdom and learnt the way from our mothers – Archbishop Scicluna

Be loyal to the country not to a political party exhorts...