Addressing the two seminarians, Archbishop Scicluna explained that today, the Church blessed their efforts, their call, as well as their choice to become priests. 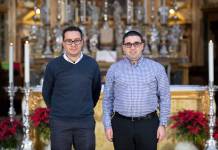 During his homily, Archbishop Scicluna reminded the congregation that Jesus is the light of the world. Referring to the deacon’s proclamation of the Church’s liturgical year, the Archbishop said that during the holy night of Easter, Jesus is declared as the light of the world. Jesus through His resurrection overcame darkness which is brought about by evil and hatred. Through His crucifixion, He has kindled the light in our hearts.

Explaining today’s liturgy, Archbishop Scicluna said that in the morning prayers, the Church is celebrating its status as the Bride of the Lord. “Today is a big feast of love for the Church,” Mgr Scicluna explained likening the feast of the Epiphany to St Valentine’s Day for the Church.

He referred to Jesus’ baptism, explaining that He who was without a sin was Himself baptized by John the Baptist, and with His baptism Jesus cleansed us too.

Further, today is the celebration of the arrival of the three magi who brought their gifts to Jesus. ‘Gifts, are an old tradition at weddings,’ Mgr Scicluna explained. The magi came bearing gifts of gold, frankincense and myrrh. Archbishop Scicluna added that one of the gifts symbolized the suffering through which Jesus as a servant would go through.

The Archbishop also referred to the wedding of Cana in his homily and to Mary the Mother of God’s role. She urged him to transform the water into wine, she introduced Jesus to the bride, Mgr Scicluna explained. ‘Mary encourages us to overcome darkness, to strive for good and justice, and to be happy,’ he added.