Fr Gordon Refalo was installed as a parish priest of the community of Gżira on Sunday, during a ceremony presided over by Archbishop Charles Scicluna.

Mgr Scicluna presided over a mass held at the Chapel of St Anthony of Padua at Fort Manoel in Gżira which he blessed before Mass.

He explained that in the three year lectionary one does not find the Gospel according to St John in a dedicated liturgical year, instead the readings are scattered in the other years. Some passages for St John’s Gospel occur every year.

Referencing the first reading, Mgr Scicluna explained that during Advent the faithful are being called upon to prepare for the Lord’s coming.

After the homily Fr Refalo renewed his vows and was installed as parish priest. Mgr Scicluna prayed so that the community of Gżira finds comfort in Fr Refalo’s words. 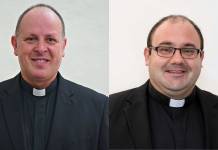 The Chapel of St Anthony of Padua

The Chapel of St Anthony of Padua on Manoel Island was built and consecrated at the beginning of the 18th Century. It was partially destroyed by aerial bombardment in 1942 during World War II.

The chapel contains a nave with a main altar and four side altars, and the rear part of the building includes a sacristy. A crypt with a single altar is located beneath the chapel. Among those buried in the crypt is Charles François de Mondion (1733) – an architect and military engineer involved in the fort’s design and construction.

Research has shown that no Archbishop has ever visited this chapel, making Sunday’s Mass more significant.