“You are being ordained deacons to be of service to the community.” This was the leitmotiv of the homily of Archbishop Charles J. Scicluna during the ordination of five new deacons at St John’s Co-Cathedral.

Archbishop Scicluna explained how the diaconate, which is the first stage of Holy Orders, is an ordination for serving the community in the same spirit that Jesus serves his people.

Archbishop Scicluna then went on explaining the word ‘servant’ in Latin, which is minister or servus and in Greek which is diakonos and added that therefore when one is ordained a deacon, one becomes a servant within the spirit of God. He explained that God entrusts the Christian flock to the deacons while they themselves are and will remain part of the flock.

“You wash feet and carry lambs as Jesus did” said the Archbishop referring to a painting of Christ the Shepherd made by one of the new deacons. He noted that Christ was very appropriately wearing the crown of thorns as He saved us by His blood. The people that are served are not “our people but are His people.”

Open you heart to all – Archbishop

Archbishop Scicluna them spoke of two attitudes – listening and following – which one can lift from today’s Gospel reading. He also reminded the congregation that Christ not only promised his followers eternal life but also that no one will take them out of His hand.

Since Jesus asks the disciples to listen to His voice, the deacon should “open his ears before opening his mouth, to live the Gospel before proclaiming it. Listening to the Lord is the first fundamental calling,” said Mgr. Scicluna. He referred to the Maltese word “jisma’” which also means ‘obeying’.

Jesus engages with the disciples in an intimate way, said the Archbishop while referring to a life of prayer and celibacy as two ways in which the deacon lives this intimacy.

Embracing celibacy, said Mgr. Scicluna, does not mean choosing a solitary life without love, but celibacy is the opening of their heart to everyone everywhere for the love of God.

“Open you hearts to all but first and foremost for God’s love. You spiritual intimacy with the Lord confirms that you are not alone but you are with the Lord. Let Him be part of your life. Do not be alienated by this world’s promises. The Lord will be where you are. But He wants you to be where he is that is why He said follow me.” 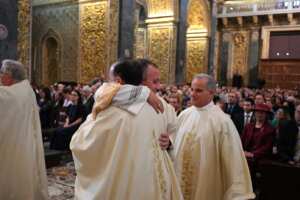 Mgr. Scicluna exhorted the new deacons never to think that they know it all. He repeated the constant saying of Pope Frances that the church’s teaching should never be used as stones to throw at people to hurt them or silence them.

The Archbishop invited the congregation to pray for vocations. But while such an appeal is generally understood as a reference to priestly vocations, Mgr. Scicluna said that his words refer to both the sacrament of marriage and the sacrament of Holy Orders as both build the community.

“I do not promise you an easy life but I promise you the joy in the Spirit” concluded the Archbishop. 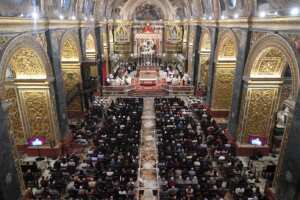 Pope Francis prays from migrants “forced to flee their homes like...