An inmate’s wife expressed her sorrow and frustration at the way her husband is being treated at Corradino Correctional Facilities, including being placed in a cell with Covid-19-infected inmates. He was caught stealing to sustain his addiction.

Marija*, during an interview with Newsbook.com.mt, explained that her husband was immediately confined in Division 6, a division she described to be the “punishment division”. She stated that the stories he had to tell her after only 4 days of imprisonment were “horrific”.

You can listen to the entire interview here:

The Covid-19 situation in Corradino

Deputy Prime Minister and Minister for Health Chris Fearne stated that he is to investigate what’s happening with regards to the Covid-19 situation in Corradino. He said this during a programme on TVM.

Newsbook.com.mt followed up by inquiring about the investigation, at which point we were directed to the Ministry of Internal Affairs. At the time of publication, we have recieved no response. Marija said that the Covid-19 situation within the prison’s walls appears to have calmed down. 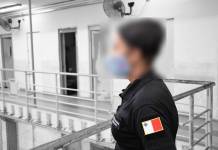 “They end up worse off”

Marija said that during her husband’s stint in prison, no professional or social worker has been by. She said that prisoners are meant to be reformed, and yet, they end up worse off because of the way they’re treated.

Marija called Corradino and asked for her husband after 4 days of no contact, especially since she can’t visit. She was told off for doing so.

Marija also described the life she’s living as a result of her husband’s imprisonment. Her voice broke as she explained that they used to split the bills, and now she can barely afford food.

Marija will be turning to support systems such as Caritas Malta, Mid-Dlam għad-Dawl and Prison Fellowship for help.

*Marija is a fictitious name. The interview was recorded on Monday 23rd November, in the evening.