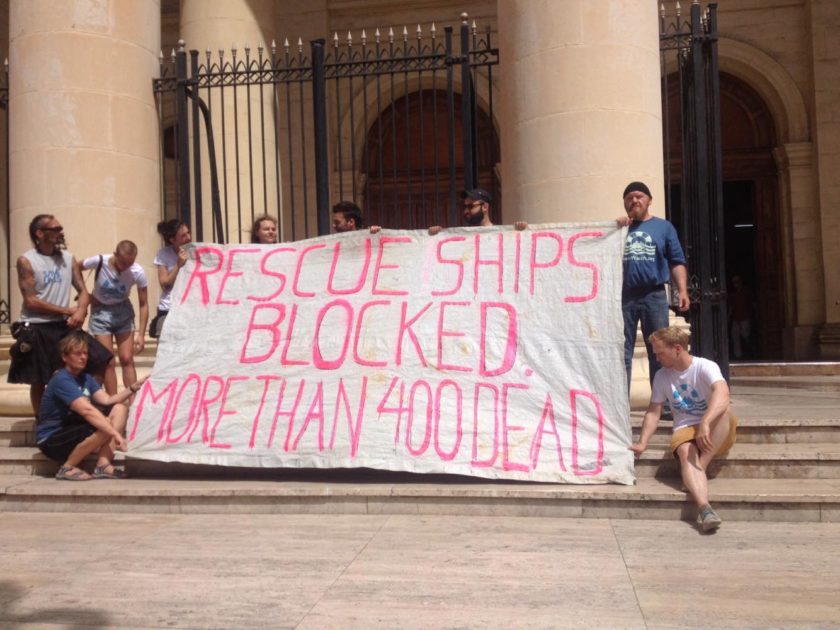 Mission Lifeline and Sea-Eye are among the humanitarian civil search and rescue organisations currently fundraising to charter new vessels. Proactiva Open Arms founder Oscar Camps earlier on Wednesday tweeted that it has been a week without civil search and rescue boats in the Central Mediterranean, saying that it has also been a week without any related news.

Sea-Watch, Sea-Eye and Mission Lifeline still have their vessels blocked in Malta. Transport Malta failed to identify which regulations were breached by Sea-Watch and Sea-Eye when asked by this newsroom. Sea-Watch’s survelliance plane Moonbird was not allowed to leave Malta.

Mission Lifeline has currently reached 66% of their goal as they continue to fundraise for the €475,000 goal to buy a replacement ship. Their search and rescue ship, MV Lifeline, is held in Malta as the Captain Claus-Peter Reisch continues to face charges in court following the disembarkment of 234 people saved from drowning.

On their website, Mission Lifeline say that their aim is to save people in distress. Mission Lifeline operates in the Central Mediterranean. As disclosed during the public discussion meeting, most of their funds come from various people donating as little as €5.

Sea-Eye are also preparing to charter a ship which will carry the name Sea-Eye 2 in order to continue operating in search and rescue in the central Mediterranean. On their website Sea-Eye explained how they have been entangled in a bureaucratic fights.

Another civil rescue organisation is Resqship which is also collecting donations in order to be able to purchase a ship and embark on civil search and rescue.

The Spanish non-governmental organisation SMH or Humanitarian Martitime Rescue Association carries out both onshore and offshore operations. These consist of sea-watch and rescue as well as awareness campaigns on human rights onshore.

Civil Fleet collected almost €300,000 in donations in order to charter a rescue ship in order to save lives.

Currently there are no civil search and rescue ships operating in the Central Mediterranean. Proactiva Open Arms is currently in Barcelona where they are undergoing a crew change. Aquarius chartered by SOS Mediteranee and operated in conjunction with Doctors Without Borders (MSF) was on its way to Marseille when it overheard a VHF call about a boat in distress which was 10nm from the vessel’s position. Aquarius saved five people from the rubber boat after alerting both the Tunisian and Italian Marine Rescue Co-ordination Centres. As of Saturday Aquarius has been in standby in international waters at 45nm from the Tunisian coast awaiting further instructions from UNHCR since it remained concerned about the potential breach of international refugee law if the five survivors were to be returned to their home country. UNHCR conducted individual Skype interviews with the survivors.

In June 2018, 629 people drowned in the Central Mediterranean. Shocking images emerged of Josephine from Cameroon who was saved by Proactiva Open Arms  among the debris of the wooden boat they had been travelling on. The images also showed the lifeless body of a woman and a child.

Alan Kurdi heads to Malta with 13 people on board