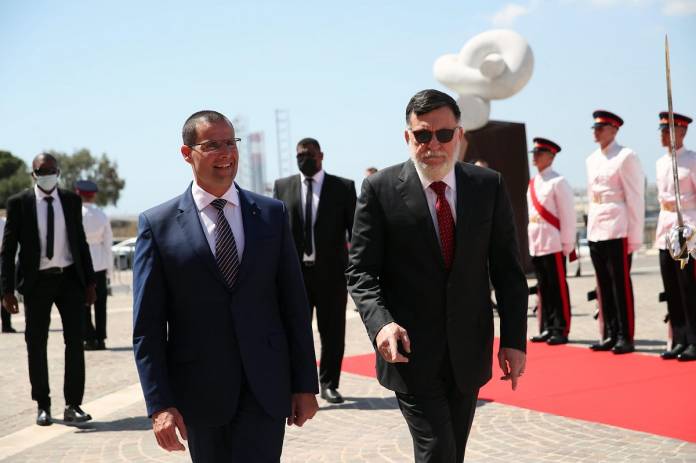 Malta considers Libya as a “trustworthy friend” and the Libyan people “as brothers and sisters of the Maltese and Gozitan people.” This was said by Maltese Prime Minister Robert Abela during a meeting with President of the Libyan Presidency Council of the Government of National Accord Faiez Mustafa Serraj in Castille.

President of the Libyan Presidency Council of the Government of National Accord Faiez Mustafa Serraj arrived in Malta on Monday. At the Malta International Airport, he was welcomed by Minister for Foreign and European Affairs Evarist Bartolo and Minister for Home Affairs, National Security and Law Enforcement Byron Camilleri.

Also accompanying the President of the Libyan Presidency Council of the Government of National Accord are Minister for Foreign Affairs Mohammed Taher Siala and Minister for the Interior Fathi Ali Abd-AlSalam Bashagha.

Fayez al-Sarraj’s visit was confirmed by the Maltese government on Sunday.

Prime Minister Robert Abela and the President of the Libyan Presidency Council of the Government of National Accord Faiez Mustafa Serraj have also inaugurated the Malta-Libya Coordination Centre at Belt is-Sebħ.

In a statement issued by the Maltese Government, it stated that since Malta considers Libya a trustworthy friend, this government wants this cooperation to continue, a cooperation based on the following trust by both parties.

PM Abela insisted that the goal is to have more border protection, less human trafficking, less criminal activity and most importantly, less loss of life. In addition, they also want to strive to improve the quality of life through funding, especially from the European Union in Libya, Africa and other neighbouring countries.

Abela stressed that historically, the two countries have always had very good relations which have led to a number of investments and cooperation in several different sectors. These investments, the Prime Minister reiterated, led to results that both countries have benefited from.

For his part, Faiez Mustafa Serraj thanked the Maltese Government for the welcome given to the Libyan delegation and said that the frequent visits to Malta is in order to have better consultation between the two countries on various common and interesting topics.

The President of the Libyan Council stressed that the challenges that exist in the Mediterranean region must be faced together by working together. This will also result in creating new opportunities that benefit both the Maltese and Libyan people.

“An opportunity for both countries to strengthen their relations” – President Vella

President George Vella welcomed Faiez Mustafa Serraj at Sant’Anton Palace, where they
exchanged views on the present and future situation in Libya.

In a statement, it was expressed that the Maltese President underlined the mutual bilateral interest in achieving peace and stability in the region. He said that the Libyan President of the Presidency Council of the Government of National Accord’s visit to Malta is an opportunity for both countries to strengthen their relations and renew cooperation on migration and security in the Mediterranean, as well as to reinforce the friendship that has been ongoing for decades between Malta and Libya, since diplomatic relations were established.

In May, Prime Minister Robert Abela led a delegation composed of Foreign Affairs Minister Evarist Bartolo and Home Affairs Minister Byron Camilleri to Libya on an unannounced official visit. During that visit, the two governments signed a memorandum of understanding in which they committed themselves to continue addressing human smuggling and trafficking from the war-torn country to Europe.

The bilateral talks will focus on themes of interest to both countries including migration.

Former OPM employee Neville Gafà who had claimed that he was asked to coordinate a push back of migrants to Libya by the government, asked whether Al-Sarraj would be visiting Malta in the coming days in a tweet on 26 June. The tweet was accompanied by footage showing Al Sarraj arriving in Algeria for talks with President Abdelmadjid Tebboune.

Prime Minister Robert Abela had denied tasking Gafà with coordinating a push back and said that Gafà was asked to use his Libyan contacts over a group of asylum seekers that were adrift the Maltese Search and Rescue Region.