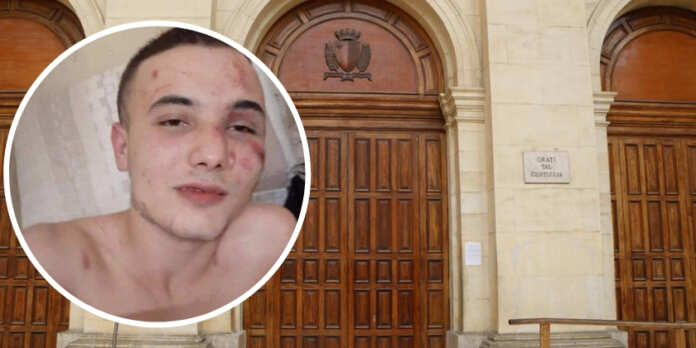 Liam Debono forgave the five men who attacked him at his workplace last week, the court was informed during the hearing on Sunday. They all pleaded guilty initially, but changed their plea by the end. Chaos ensued in court at a point when one of the accused passed out, with family members wailing for an ambulance and calling for justice.

Inspectors Sarah Zerafa and Paul Dimech took to the stand with Zerafa saying that after she called them Saturday morning asking to speak to them, they all came in together to the station and were subsequently arrested. The Defence did not contest the validity of the arrest.

While the case was being heard, both legal parties approached the Magistrate’s bench for a long while, with lawyer Franco Debono overheard saying, “Explanation? They assaulted him while he was at work!”

A number of the accused were said to be on probation, but informed the legal aid that their probation had passed. The 15 year-old, however, is currently still in his first year of a three year probation, which means that if found guilty, he will be found guilty of recidivism as well.

One of the accused subsequently passed out during the hearing, leading to mass chaos to break out in court. He was surrounded by police officials and family members who were calling out for an ambulance, and for justice. After the accused is carried out to an ambulance, the other four return to the hall visibly emotional, until the fifth returns to court as well.

Franco Debono informs the court that Liam Debono wants to forgive the accused, but would like procedures against them to carry on. All he wishes is that the Court releases a protection order in his favour from the men. The Magistrate said that this forgiveness will be reflected in the final sentencing.

The accused’s legal aid informed the court that they wish to change their plea to not guilty. The Prosecution said that it has no objection to the court granting the accused bail, as long as a protection order for Liam Debono is released, and bail conditions are adhered to.

The Court decided to grant the accused bail at a €100 deposit, and a guarantee of €2000 each, as well as giving them a 9pm curfew. If they do not adhere to their bail, they will face a fine of up to €7000 and two years in prison. The accused cannot make contact with any of the Prosecution’s witnesses, especially Liam Debono.

The court also prohibited the publishing of the youngest assailant’s name, as he is still 15 years old.

The accused’s families are in the hall showing their support for the five young men.

The persons arrested on charges of assault over Liam Debono are being arraigned in court on Sunday. Police sources are saying that there are currently five individuals under arrest. On Friday, Liam was assaulted in Luqa and taken to hospital after being found suffering from injuries sustained during the attack.

Liam Debono is a young man who is being accused of attempted murder of PC Simon Schembri, after he ran him over and continued to drag him along with his car.

The case is being presided by Magistrate Gabriella Vella. Prosecuting lawyers, there as parte civile for Liam Debono who is absent, are Franco Debono and Amadeus Cachia. A legal aid is defending the accused.

Monique Agius   August 12, 2020
The council voiced its concern about the lack of alternatives in case the exams could not be held due to the coronavirus pandemic.