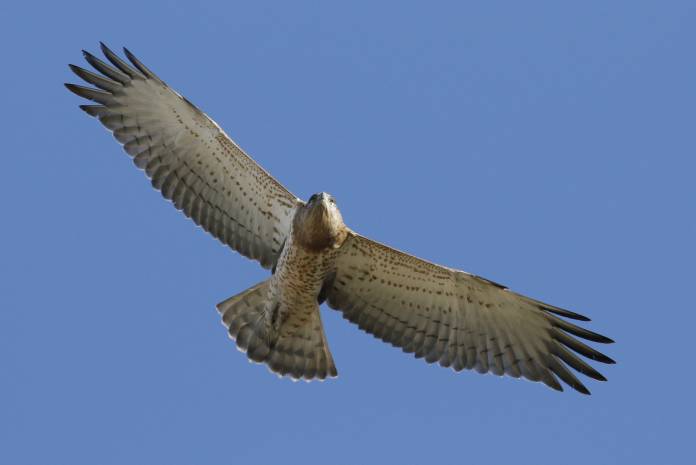 On Saturday evening Birdlife Malta reported a flock of around 15 rare Short-toed Eagles coming in and flying rather low over Malta. Many of the birds were observed settling in the outskirts of Siġġiewi and Rabat for the night.

Birdlife said that “it is not common for eagles to cross the sea during migrations and therefore our islands served them as a respite if they happen to do so”. Unfortunately, though, it appears that the fate of these majestic creatures was not a happy one. Birdlife said that these magnificent birds are met with shotguns aimed at them. BirdLife Malta said that its members witnessed one of the Short-toed Eagles being shot down at Girgenti and police from the Administrative Law

Enforcement (ALE) unit was called in immediately, with a search in the area being affected. In the meantime, the other birds scattered in the vicinity trying to find a place to roost. Various shots were heard during and after sunset, and all areas where the birds roosted had intense hunting activity going on at the time of the roosts. Investigations, however, have not led to anyone being convicted or any carcass being retrieved.

The following morning at 5:00am teams of BirdLife Malta volunteers and staff stationed themselves in the area to monitor the birds leaving the roosts. However, their worst fears that the birds might have all been shot before they actually managed to roost were confirmed when only one bird was seen leaving Buskett at around 6:30am. The bird was later sighted in the north of Malta. There was no other trace of the other birds anywhere in spite of the fact that the morning watch organised by BirdLife Malta continued. “Most of them are believed to have been shot dead” said Birdlife.

Such rare occasions when eagles arrived in the past were also met with incidents of illegal hunting. The most recent previous record goes back to the start of November 2016 when around 60 Booted and Short-toed Eagles were targeted by hunters in multiple incidents. One incident at Tal-Virtù of a Booted Eagle being shot down had been filmed by BirdLife Malta and this had led to a hunter being jailed and fined. The case is now on appeal. In another massacre three years earlier, on the 23rd October 2013, around 50 eagles (Short-toed, Booted and Lesser Spotted) migrating over Buskett also met the same fate. In this case 12 of the protected birds had been confirmed shot with many more witnessed being targeted by