Less than half of the MEP candidates that returned a questionnaire from the Federation for Hunting and Conservation Malta (FKNK), signed their attached manifesto.

Of the 17 respondents which supplied their responses to a six question questionnaire and manifesto, only 8 of them actually signed the document.

With the run up to the European Parliamentary Elections, the FKNK has been looking for the support of Malta’s next set of representatives. The hunting body presented a manifesto outlining 6 key policy statements focusing on protecting the hunting tradition, changes to the Common Agricultural Policy in 2020, cutting bureaucracy on hunters travelling with and buying firearms, more national management of wildlife and hunting, ending bans that undermine conservation management and the reinstatement of biodiversity groups.

The questionnaire and manifesto were understood to have been submitted to the prospective MEP candidates running in the election on the 11th March, with their collected answers received by 3rd April. 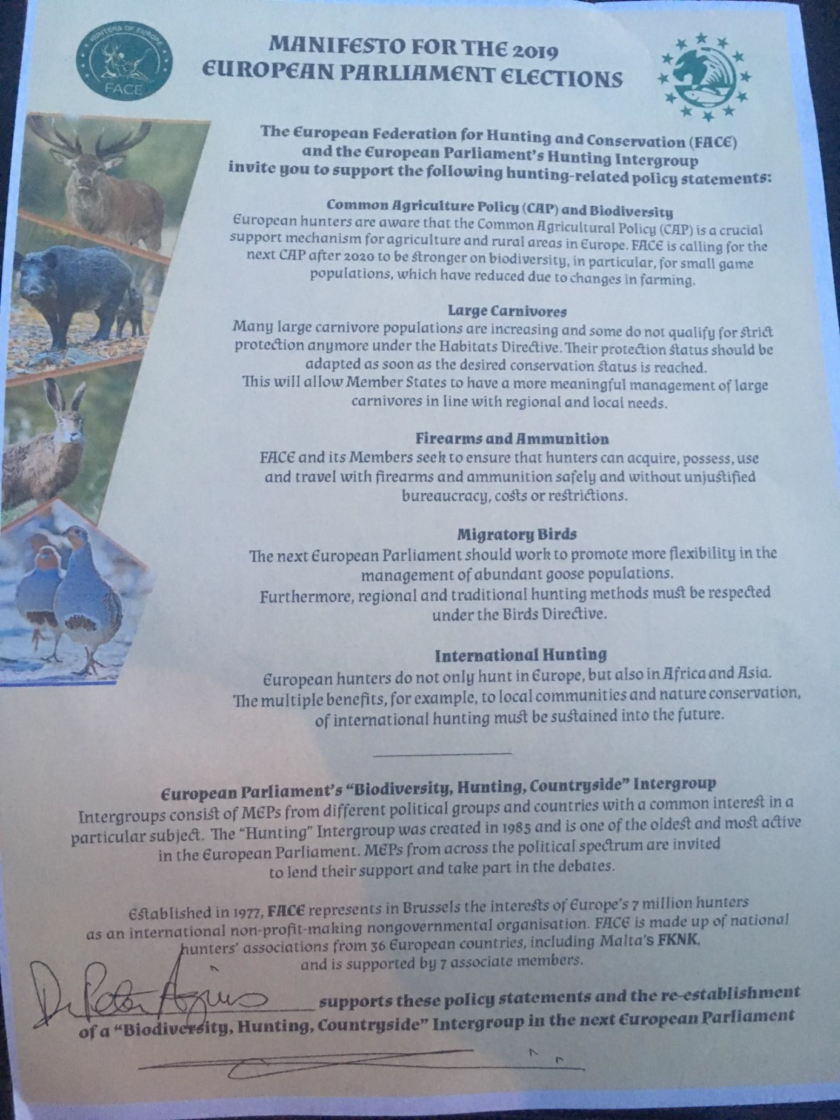 Those who signed the document include Labour’s Alex Agius Saliba, Felix Busuttil, Josianne Cutajar, Cyrus Engerer and Joe Sammut. For the Nationalists; Peter Agius and Michael Mercieca.  The eighth and final signatory of the manifesto was the Moviment Patriotti Maltin candidate Simon Borg.

Those who did not sign the manifesto include Labour’s previous MEPs Miriam Dalli and Alfred Sant. Other non-signatories also include the Independent candidates; Mario Borg and Arnold Cassola, the MPM Naged Megally, two PL candidates; Fleur Vella and Robert Micallef, the Imperium Europa candidate Normal Lowell and the PN candidate Frank Psaila.

In the opening question to MEP candidates, the FKNK asks if they will support and assist them to reinstate their ‘socio-cultural traditions of turtle dove spring hunting and live capture of finches.’ The hunting body explains that these, ‘constitute our ‘way of life’, are at present on hold as a consequence of the EU Commission’s extreme interpretation of the Nature Directives.’

How did Labour respond?

Engerer explains that based on his experience as the Prime Minister’s Envoy to the EU, he wants a, ‘more realistic approach by the European Commission on hunting and trapping,’ and that there, ‘should be allowed to establish a national quota for turtle doves which could be hunted during April and September.’

Cutajar answers the first question by explaining that she fully appreciates, ‘the beauty of the traditions which you seek to protect. Rest assured that, if elected to the European Parliament, I will be doing my best to support and assist FKNK in its efforts to preserve our unique culture.’

Like Cutajar, Agius Saliba responds that  he is ‘committed to safeguard the hunting and the live capture of finches pastime since I strongly believe that this is “a way of life” of thousands of Maltese and Gozitan citizens.’

Busuttil explains that he and the Labour Party were ‘always clear’ on, ‘hunting and trapping traditions.’ He stresses that, ‘based on sustainable structures, I will do my utmost to safeguard the love and passion many have and will work in favour of such traditions.’

Sammut also agrees with the FKNK stating that the EU’s delivery of restrictions and derogations is unequal among EU member states and even external neighbours. ‘It does not make sense to have other countries obtaining derogations to shoot song birds and we get denied… The principle of solidarity has to be applied everywhere and evenly,’ Sammut states.

While these five Labour MEP candidates were signatories to the FKNK questionnaire, their more experienced colleagues did express support short of signing the manifesto.

The Labour MEP who sat in the 2014 – 2019 legislature explained that his ‘support and assistance’ would ‘remain conditional on full observance of existing rules and regulations under EU law. In my view, the adoption of “offside” positions in the hope that they will be validated is not a viable option and will only serve to aggravate the situation.’

While Dalli points out that she fought to ensure that Malta was not singled out over hunting, reiterating that the ‘Labour Party’s position in relation to spring hunting and trapping has always been very clear and, if re-elected, I will continue to do my utmost to ensure that this tradition is protected whilst ensuring that our environment is safeguarded.’

Joining the incumbent MEPs, are Robert Micallef and Fleur Vella. Both provide exactly the same answer to the question of traditions saying, ‘The position of the Labour Party in relation of sustainable hunting and trapping has always been very clear. Therefore, once elected in the European Parliament, I will do my utmost to work in favour of such traditions.’

How did Nationalists respond?

Much like the newer Labour party candidates, the Nationalist hopefuls also express a keenness for supporting the FKNK’s desire to protect their traditions and ‘way of life.’

The only PN signatory from the list of candidates who returned their questionnaires and manifesto, Agius stresses very briefly that, ‘a lot can be done from Brussels for the cause of the trappers especially, and also for the hunters.’

Also in very brief terms, Mercieca says if elected, he will focus on ensuring that ‘our hunters should have equal rights as other hunters in the European Union.’

(Although PN candidate Frank Psaila supports the manifesto, his questionnaire is not supplied by the FKNK. )

What about smaller parties?

The MPM representative also agrees with the FKNK’s perspective but explains that they would consult with the organisation in order to ‘understand and interpret the Nature Directives’ so that they can ‘counter any arguments against spring hunting and hunting in general.’ These points were apparently shared with his colleague Mr Simon Borg.

Lowell states that his party wants a ‘balance between hunters’ rights and pro-nature drives.’ He also stresses that there are other aspects that are more serious than hunting and these involve ‘the use of certain pesticides.’

How do the Independent Candidates view this?

While Borg had only introduced his candidacy for the European Parliamentary elections a short while ago, he is still not familiar with the needs and wants of FKNK. While he is happy to supply the details of legislation for their scrutiny, his catch is that he respects nature. ‘Endangered species must be respected and safeguarded,’ he explains.

Formerly of Alternattiva Demokratika,  the Independent MEP candidate Arnold Cassola, is very blunt and short in his response to FKNK’s call for support.  He responds by saying, ‘Certainly Not.’

This questionnaire from FKNK follows on from a similar questionnaire which was submitted by Birdlife Malta asking candidates 10 questions about 5 key priorities they wish them to support and endorse.

Should fishing and marine planning be resolved at the European level?