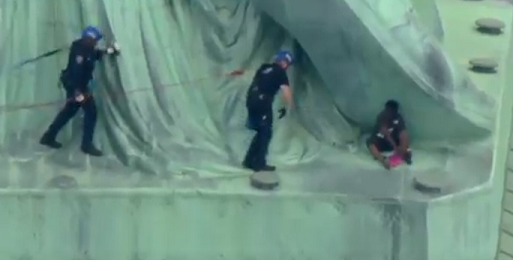 A woman climbed the base of the Statue of Liberty on Wednesday afternoon, forcing an evacuation of the New York Harbor island where the monument stands hours before Independence Day fireworks displays were scheduled to begin nearby. Ryan Brooks reports.

An hours-long standoff at the Statue of Liberty came to an end on Wednesday, after police apprehended a woman who had climbed up Lady Liberty‘s stone pedestal.

The incident forced the evacuation of thousands of tourists from the New York Harbor landmark on Independence Day. Officers needed harnesses, helmets, ladders and cables to climb up and retrieve the woman.

“At first she wasn’t friendly with us, but we took our time to basically get a dialogue with her so she would trust us. So that took a while. It was also a technical rescue from where we were- the angles that we had to go on was difficult to basically stand. There was nothing for us to grab.” said NYPD officer Brian Glackyn

Authorities couldn’t confirm whether the woman was connected to a group of protesters who had been arrested earlier on the island. That group had unfurled an “Abolish ICE” banner, targeting the U.S. Immigration and Customs Enforcement.

ICE has been at the center of the Trump administration’s shelved policy of separating immigrant families at the U.S.-Mexico border. The Statue of Liberty was constructed on Ellis Island, a landing place for the thousands of Irish, Polish and German immigrants who fled the potato blight and other famines which periodically swept across agrarian Europe in the 19th Century.