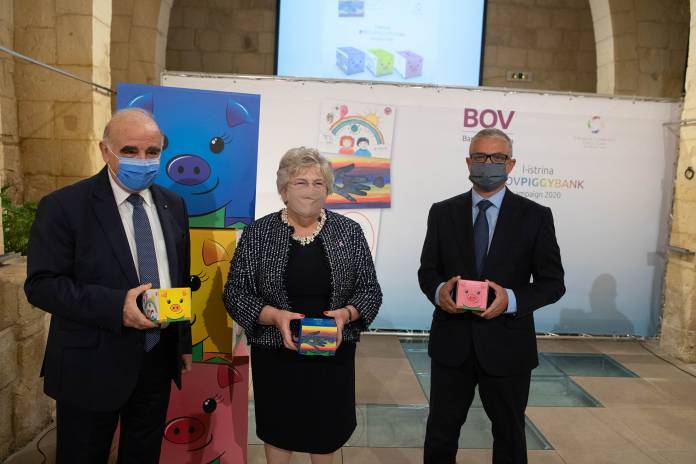 This year’s edition will see the traditional plastic piggy bank replaced by a cardboard piggy bank that is easily recycled, and will reduce the negative impact on the environment. The three new Piggy Banks, feature drawings by the 3 winners of a competition organised for this purpose and saw the participation of 91 children.

His Excellency, President George Vella explained how this year is a very difficult one for The Malta Community Chest Fund Foundation which, like other organisations, had to cancel a number of fund-raising activities that are normally held.

The President encouraged students, together with their school teachers, to contribute to the L-Istrina BOV Piggy Bank Campaign which will help to instill a sense of altruism and solidarity among students and, in cooperation, unite for a noble goal of raising funds for Malta Community Chest Fund Foundation (MCCFF).

“This year’s campaign will definitely be one the most challenging ever,’ said Charles Azzopardi, ‘Schools are operating on different schedules, some students receiving their tuition at home, combined with social distancing and health authority regulations and recommendations. However we appeal to you to put that little something in the piggy bank in your class. When you multiply that small donation by the thousands of students in schools over Malta and Gozo, we can end up with an attractive sum to present to the Malta Community Chest Fund Foundation.

“This is the 17th consecutive year that Bank of Valletta is collaborating with the MCCFF to distribute piggy banks in all classes of all primary and secondary schools on our islands,’ proceeded Azzopardi, ‘Funds collected through the campaign as well as donations by the bank have now exceeded the €2 million mark.’

The funds collected through the campaign including a donation by Bank of Valletta will be presented during the live broadcast of L-Istrina on the 26th December 2020.