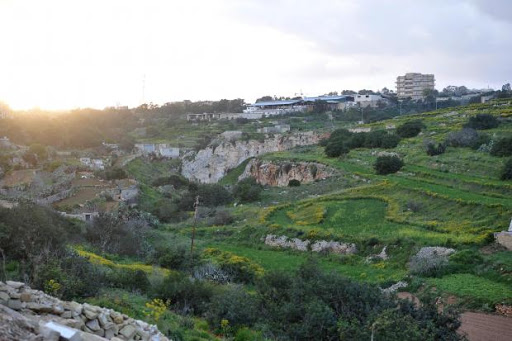 In a public consultation process which will end today, Newsbook.com.mt has noted that the important ecosystem known as Wied GĦomor has been omitted from inclusion as ‘public domain’. Two sites, one known as l-Ghadira s-Safra, limits of Naxxar, and the other forming part of a larger area known as tal-Gheriexem and il-Marg, limits of Rabat (Malta), are being recommended by the Planning Authority to be declared as ‘Public Domain’. Wied Għomor is not.

Wied Għomor is considered by ecologists and environmentalists as one of the few remaining green lungs in the otherwise densely developed Sliema-St Julians-Swieqi conurbation. Spanning a swathe from San Gwann through Swieqi and ending in Spinola, the Planning Authority’s local plan policy NWSW 06 is dedicated to this important site:

“Wied Ghomor and its tributaries were scheduled by the MEPA as protected areas in June 1999. The scheduling, through Structure Plan Policies RCO 10 and RCO 11, Areas of Ecological Importance and Sites of Scientific Importance…Proposals should promote the rural identity of the area and avoid unnecessary infrastructure and buildings that might compromise the area’s setting and character. In considering subsequent applications for development (made with reference to the agreed management strategy), MEPA shall require that all structures are unobtrusive in terms of their design, size and bulk. Structures should use materials that are sensitive to their surroundings.”

On the advice of the AG

The information on the public consultation document states that

“The data from the Lands Authority indicates that Site 2017-2: Wied Għomor and Wied il-Kbir, San Ġwann has around 27% of the land area under Government ownership; this area is mostly with third party interest. Site 2017-5 Inland and coastal area from Baħar iċ-Ċagħaq to Pembroke, has less than 50% of its area under Government ownership. Following the guidance provided by the Office of the Attorney General in 2017, both these sites are not being considered for declaration as public domain”. Therefore, while the site is considered by the Planning Authority important enough to preserve scientifically, the government does not consider it valuable enough to protect.

Lawyer and MP Jason Azzopardi said that the issue of Wied GĦomor has been raised repeatedly over time. Azzopardi explained: “The concept ow ownership is based on Roman law which enables the owner to dispose of property at will. To use and abuse, so to speak. The law of the public domain restrains the user from ‘abusing’ property”. He added that the law does not remove the land from the owner, as happens in expropriation. In this case, an area is deemed important enough for government, as the manager for the community, to intervene and regulate strenuously how the land can be disposed of. This reading of the law was corroborated by lawyer and environmentalist Claire Bonello who added that this important tract of land was being ignored while less critical sites were being considered.

An architect who preferred not to be named explained it further: “ If you are planning to build a house and on your land, you find archaeological remains, you can say ‘good-bye’ to your house. The land is yours but you cannot build on it. The remains are protected for the common good.”

Sadly, for Wied Għomor, the government does not seem to feel the need to protect this stretch of land. In an area which is densely built, the constant forays which individuals make, attempting to erode parts of this valley through planning applications are incessant. This means that the question of development becomes one of when not if.

In July 2019, the Environment and Resources Authority had appealed a decision made by the Planning Authority to greenlight a project that would see the development of Farmhouse and pool in Wied Għomor. The project would have taken place in an ODZ and in an area that is scheduled a sight of ecological and scientific importance. ERA said that the decision itself goes against the Strategic Plan for the Environment and Development and the North Harbours Local Plan. The latter plan states that a detailed management strategy along the valley and that development that undermines the conservation of the valley should not be approved. ERA had concluded that it’s worrying that the commission goes against what is said by the Case Officer and ignores expert advice and NGOs.

In another case, the development of a guesthouse, the St Julians and Swieqi Local Councils had submitted to the PA: “The cumulative effect of such development must not be allowed to choke St Julian’s. We ask what has become of the proposal to designate Wied Ghomor a public domain site, while it suffers from the onslaught of outrageous proposals.”

The PA preferred to adopt a legal approach as directed by the Attorney General rather than a planning approach as was its remit.

As one source put it to Newsbook.com.mt: “At this rate, we will soon say ‘l-għomor’ to Wied Għomor”.