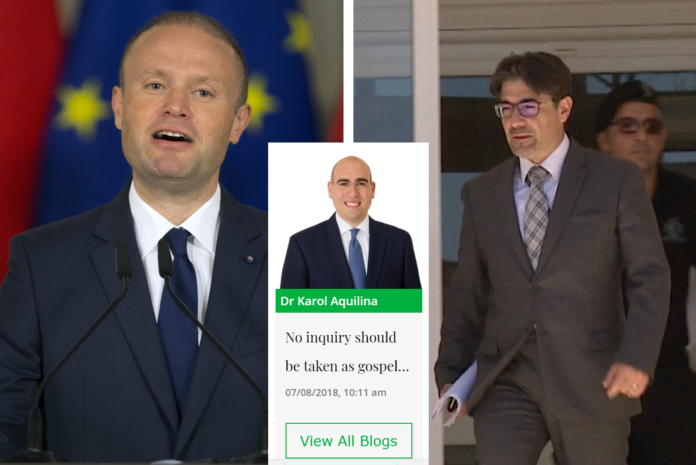 In his blog on Newsbook.com.mt, Nationalist MP Dr Karol Aquilina says that the Egrant inquiry should not be taken “as gospel truth”.

Dr Aquilina commented on what he called the despotic behaviour from the authorities, as well as the fact that they are still withholding over 96% of the inquiry report from the general public.

He is also of the opinion that the Attorney General is abusing of the powers that his position grants him.

Dr Aquilina says that he is curious to see the outcome of the case filed by Opposition and Nationalist Party leader Dr Adrian Delia, and hopes that the Maltese courts will accede to the attorney general’s decision and give the order for the public distribution of the full inquest report.

Referring particularly to Jacqueline Alexander of Mossack Fonseca and her denied bail and detention by a Panama court in relation to money laundering and organised crime he also emphasises that no-one should take the inquiry report as the complete truth, as he is sure that further witnesses and evidence have not yet been identified. These kinds of developments often create a legal base for reopening an inquest, he said, referring specifically to the Nicholas Azzopardi case of a couple of years ago.

He states that, notwithstanding the fact that our current justice system is flawed, we must keep on pursuing the truth.

Reaction of the Labour Party

The Labour Party stated that there are still individuals sitting in Parliament who are undermining justice., and that their leader Dr Adrian Delia is facing another testing situation. The Party also said that Dr Aquilina was one of the deputies who publicly lashed out against the inquest lead by Magistrate Aaron Bugeja.