A juvenile flamingo was handed over to the Police by members of Kaċċaturi San Ubertu on Monday morning.

In a statement, the hunting association explained that a tired juvenile flamingo was sighted at l-Għadira is-Safra, a Natura 2000 site managed by the same organisation.

The bird was allegedly tired, with the KSU’s members calling the Administrative Law Enforcement section of the police to take the bird. Kaċċaturi San Ubertu stressed that at law, only the ALE section could handle such birds.

In its statement, the organisation urged the general public to report the finding of protected birds to the ALE by calling 22942161 or 119.

Flamingos are currently in their autumn migratory seasons on their way to Africa. They generally travel in flocks of adults and juveniles. However juveniles would occasionally descend to the ground to rest during the journey.

The organisation remarked that it has become a common occurrence for juveniles to seek land as they would not have enough energy and reserves to complete their journey to Africa.

A juvenile flamingo was found dead in the sea in an area known as il-Ħofriet close to Xrobb l-Għaġin, Delimara after it was reportedly shot. 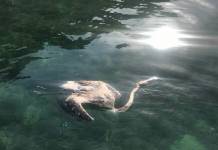