Caruana Galizia was assassinated in a car bomb outside her family home in Bidnija on 16 October 2017. Her murder sent shockwaves through the country and has attracted international condemnation.

In a tweet, von der Leyen stated that Caruana Galizia’s murder was a brutal attack on free media.

The European Commission president underlined that justice must be secured through the ongoing investigation and public inquiry without any political interference.

Archbishop Scicluna presides over Mass in suffrage for Caruana Galizia
Watch: “God forbid we allow impunity and arrogance to poison us”- Archbishop 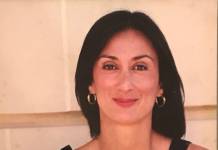