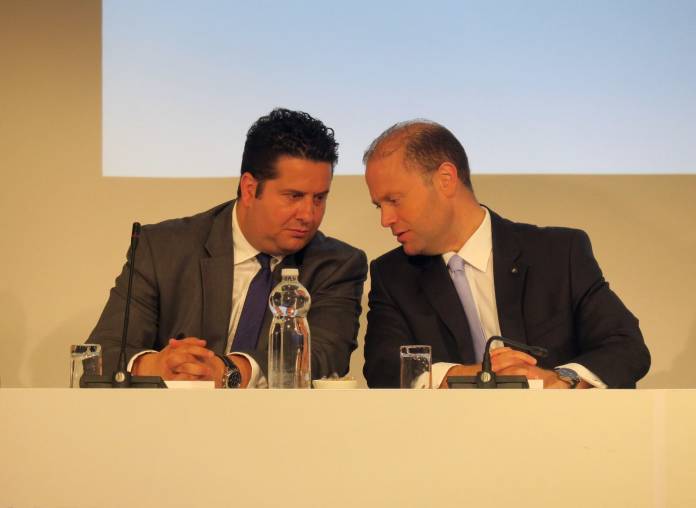 11:21 That is it for today. Thank you for following us.
Amy Borg
11:21 Next Wednesday at 2 pm, Mark and Joe Gasan will give their testimony.
Amy Borg
11:20 The next sitting will be on Monday at 2 pm and Paul Apap Bologna is expected to testify.
Amy Borg
11:19 Zammit Lewis's testimony ends here.
Amy Borg
11:17 Zammit Lewis is asked if he used to discuss Panama Papers and 17 Black with Schembri and Fenech when they used to meet socially.

Zammit Lewis also clarifies that he never went abroad with Schembri, alone.
Amy Borg
11:09 He says that when he received the information that Fenech was involved in the assassination "The situation was shocking"

"I have always communicated with him in good faith" said Zammit Lewis.
Amy Borg
11:07 "Did you feel comfortable to keep up with these relationships despite the Panama Papers revelations?" – Dr Azzopardi

"Well before he was arrested" – Zammit Lewis
Amy Borg
11:06 Dr Jason Azzopardi is asking the questions now.
Amy Borg
11:05 He also said that Muscat's decision to leave politics will help alleviate tension in society, said Zammit Lewis
Amy Borg
11:03 "When I saw Muscat leaving in that way, I felt that a chapter has been closed and that Muscat should have never ended his political career in that manner," said the Minister
Amy Borg
11:02 "I will always feel betrayed because I entered politics because I believe that things could be done better for the common good but you feel betrayal when others do not cherish your same aims and values" – Zammit Lewis
Amy Borg
11:00 When asked about his position now that the NAO published its report on the project, Zammit Lewis says that he believes and does not doubt the NAO.
Amy Borg
10:55 The board asks the witness about an article published on Malta Today in which he says the db project set to replace the former ITS in Pembroke, was a good deal for Malta.

Zammit Lewis says that he was not involved in the deal – The deal was in the hands of Projects Malta which at that time Konrad Mizzi was responsible for.
Amy Borg
10:55 "I never saw Fenech at Castille" – Zammit Lewis.
Amy Borg
10:53 The Minister says he has brought with him all the receipts which show he has always paid for the events organised at Fenech's hotel.
Amy Borg
10:53 Zammit Lewis continues to explain that he did not feel Fenech was affecting his work as an MP.
Amy Borg
10:52 He says, around 4 years ago, he was with Fenech on his yacht.
Amy Borg
10:51 Dr Comodini Cachia asks Zammit Lewis to distinguish between his relationship with Paul Apap Bologna and Yorgen Fenech as it seems you stopped communicating with Apap Bologna but not with Fenech, even though he was the owner of 17 Black.
Amy Borg
10:47 Zammit Lewis confirms he was invited and that Fenech was present.
Amy Borg
10:46 Questions have now shifted on the party at Girgenti organised by Joseph Muscat.
Amy Borg
10:45 He says that Joseph Muscat never mentioned to him any power station project before the 2013 election.
Amy Borg
10:44 He explains that through his political career he learned that when he feels that certain relations could have a negative effect on his work then he shuts down any form of contact with the individual/s.
Amy Borg
10:41 Comdini Cachia asks the witness if he met with Yorgen Fenech after it was revealed he was the owner of 17 Black.

He says at that time he was not part of the cabinet.
Amy Borg
10:39 Asked if he knows Yorgen Fenech, the Minister says yes and there was an exchange of communication between them. He got to know him in 2013/2014.
Amy Borg
10:38 He also says that there were times when the three of them were in the same room.
Amy Borg
10:37 Asked if Paul Apap Bologna had asked him to set a meeting for him with Muscat, Zammit Lewis says that, formally, he was never confronted with such request.
Amy Borg
10:35 Asked about excise tax refunds in relation to Electrogas, Minister Zammit Lewis says he does not believe the presentation went into that much detail.
Amy Borg
10:33 Dr Comodini Cachia asks Zammit Lewis if he remembers when was the presentation by Konrad Mizzi delivered.

Zammit Lewis says he does not remember.

Lawyer Comodini Cachia shows the witness the presentation on a mobile phone, but Zammit Lewis says he does not remember how many days or weeks was the presentation delivered before the general election.
Amy Borg
10:32 Dr Therese Comodini Cachia is now asking questions to the witness.
Amy Borg
10:31 The board asks if he ever saw the FIAU report on Konrad Mizzi. The Minister says no.
Amy Borg
10:30 Zammit Lewis says that whenever it was possible he always gave his advice for the good of the government and the party.
Amy Borg
10:29 The board asks why it took so much time for the removal of Mizzi and Schembri from the PL.
Amy Borg
10:28 He says that although he though Mizzi should have resigned when it came to votes of confidence in Mizzi, there was a collective decision by the PL's parliamentary group.
Amy Borg
10:26 In the case of Schembri, he was chosen by Muscat. He said he had told Muscat that since Schembri was appointed by him, there will be repercussions but ultimately the decision was his.
Amy Borg
10:25 Konrad Mizzi should have resigned said the Minister. He also said that a distinction should have been made between Schembri and Mizzi.
Amy Borg
10:23 Zammit Lewis says that when Panama Papers were revealed, he formed part of the cabinet.

Zammit Lewis replies that Schembri was the person who in 2008/2009 was reorganising the party and as a govt official he was responsible for coordinating the govt's administration.
Amy Borg
10:11 He says he is not aware of a possible kitchen cabinet.
Amy Borg
10:10 Regarding the kitchen cabinet:

He says that for him cabinet meetings are held every Tuesday at 10 am.
Amy Borg
10:09 "I do not share 100% Konrad Mizzi's way," says Minister Zammit Lewis.
Amy Borg
10:08 The board asks if the cabinet was presented with an already made deal on the power station project.

Zammit Lewis asks the board to guide him as he might be limited to what he can say on the matter with the media present inside the courtroom.
Amy Borg
10:06 He continues saying that the details of the projects were not discussed and therefore he does not feel comfortable answering questions about them.
Amy Borg
10:06 Zammit Lewis confirms that the AUM and Vitals projects were discussed at cabinet level.
Amy Borg
10:04 The board is now asking questions on other projects; AUM University, Vitals and the Montenegro Windfarms.

"Were these discussed during cabinet meetings?" – The board
Amy Borg
10:03 He says he is not competent enough to answer the question as it is not in his remit.

One of Yorgen Fenech's lawyers, Dr Charles Mercieca, has entered the courtroom.
Amy Borg
10:02 The board notes how the project raised many questions and controversy and asked Zammit Lewis if this could have been avoided.
Amy Borg
10:01 Zammit Lewis said that this electoral promise was the first one to be reached as people started benefitting from lower utility bills.
Amy Borg
09:51 During the presentation, no names were mentioned.
Amy Borg
09:50 He says that regarding the power station project he remembers a presentation by Konrad Mizzi given at the PL's headquarters.

MPs and PL's candidates were present for this presentation, said the witness.
Amy Borg
09:48 When asked if he was part of the electoral campaign strategy for the 2013 election, Zammit Lewis said he was a candidate and candidates work separately from those who set the party's strategy.
Amy Borg
09:47 Minister Zammit Lewis says that prior to the 2013 general election he never saw any businessmen within the PL but he also says that he did not visit much the PL's headquarters back then.
Amy Borg
09:43 "Schembri was not involved in politics but he started organising the party, " said Zammit Lewis.
Amy Borg
09:42 "I met Keith Schembri through Joseph Muscat" – Justice Minister
Amy Borg
09:41 He says that he reconnected well with him when Muscat became the leader of the Opposition back in 2008.
Amy Borg
09:40 He says he has known Muscat since he was 10 years, they were school mates at St Aloysius.
Amy Borg
09:40 The board asks the Minister about his relations with Joseph Muscat.
Amy Borg
09:36 Justice Minister Edward Zammit Lewis has just entered the courtroom and takes the witness stand.
Amy Borg
09:35 The inquiry board has just entered courtroom no 20.
Amy Borg
09:29 Good morning and welcome to this live blog.
Amy Borg
Wednesday’s court sittinh
Inspector Zahra says data shows communication between political figures & businessmen 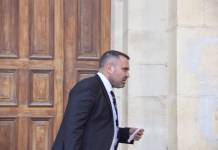