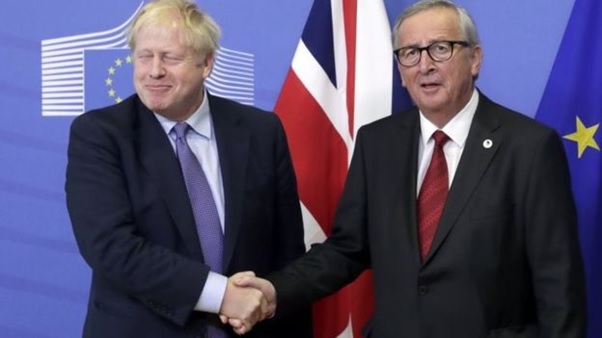 The outgoing European Commission President told the BBC that he had had enough of Brexit. Speaking to Katya Adler , Europe editor, Juncker expressed the opinion that Brexit would happen at the end of January as UK PM Boris Johnson was claiming. “The Brexit process has gone on too long already,” he said. But the outgoing European Commission president very much took issue with the prime minister’s assertion that a brand-new comprehensive post-Brexit EU-UK trade deal could then be negotiated in a year or less.

“These things take time,” he said. “Just look at the free trade deal the EU negotiated with Canada. That took seven years.”

The BBC reported that Juncker, famous for his extravagant gestures, seemed to be at pains to show that he was not trying to interfere with the UK general election. Adler wrote that “Famous for extravagant pronouncements and gestures like kissing EU leaders on the forehead or playfully slapping their face – Jean Claude Juncker was untypically guarded. He clearly didn’t want to be seen to be trying to interfere in the general election.”

Juncker said he had a feeling that many UK MPs and government ministers believed negotiating trade deals was easy. But, he said, it would take quite some time to disentangle the UK from decades of forging common rules and regulations with the EU and to form a distinct and new relationship.

But Juncker refused to be drawn on a claim made by Donald Trump that the Brexit divorce deal agreed between the EU and Mr Johnson made trading with the US an impossibility. “Sometimes the US president says this, sometimes he says that,” noted Mr Juncker, adding that President Trump’s statements didn’t always match up.