Joseph Ellis is officially a member of Parliament after taking the oath of allegiance as an MP on Monday morning.

Ellis won the casual election on Thursday and has now replaced the late PN MP Frederick Azzopardi on the 13th electoral district.

On Thursday in his first comments to the media, Joseph Ellis said that it will be a privilege for him to take Azzopardi’s seat in Parliament and that he will seek to continue working on his footsteps for the good of Gozo and its residents. 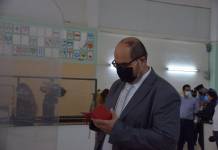