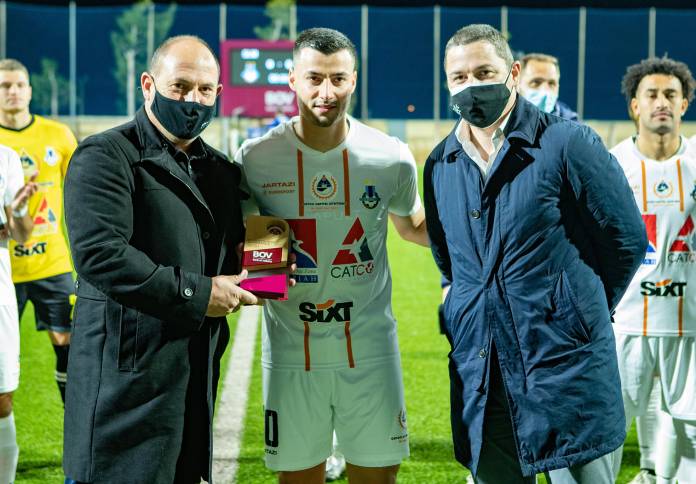 Sliema Wanderers’ Jean Paul Farrugia is the BOV Player of the Month for November 2020.

The 28-year-old striker is finding the best form of his career and is the top local scorer in the BOV Premier League with Sliema challenging for this season’s title.

Farrugia scored a brace in Sliema’s 3-1 win over Balzan during November. He opened his tally from the penalty spot after being brought down inside the area and got his second whem he slotted into the net from close range after shots by Cisotti and Milesi were blocked by the Balzan goalkeeper.

Farrugia scored another 2 goals during November, an 80th minute fine header to beat Justin Haber in Sliema’s 3-2 loss to neighbours Gzira while slotting in a penalty in their 4-1 win against Lija Athletic.

Bernard Azzopardi, Manager of Bank of Valletta’s Sliema Branch presented the BOV Player of the Month trophy for November 2020 to Farrugia in the presence of  Dr Matthew Paris, Vice President of the Malta Football Association. The player selected the Ursuline Creche to benefit from the donation associated with this award.

BOV Female Player of the Month