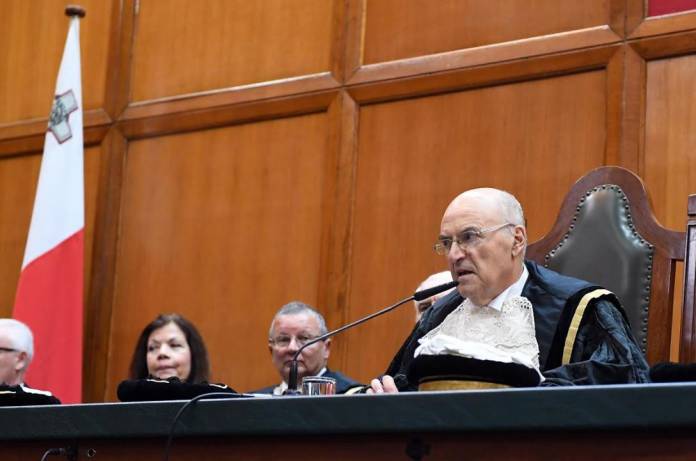 Chief Justice Joseph Azzopardi praised the Judicial Appointments Committee saying that it was doing a sterling job in scrutinising applications. He remarked that some applications have been turned down, proving that the committee was not merely “a rubber stamp”.

Delivering a speech to mark the start of the forensic year, the Chief Justice said he would not be commenting on an ongoing case concerning how members of the judiciary are appointed to the bench.

READ: Watch: ‘Justice is something you carry with you, like your skin,’ – Archbishop Scicluna

He spoke about the judiciary’s Code of Ethics and observed that they could not easily speak to the press. He added that any word uttered publicly could be grounds for recusal from a case.

“If a law is not right or is outdated, it should be changed, not broken”

Speaking about proceedings before the Commission for the Administration of Justice, Chief Justice Azzopardi said that it made little sense in this day and age for proceedings behind closed doors, without even the applicant being involved.

He referred to a report which appeared in a local newspaper which published the outcome of the Discipline’s Board before this had reached JAC. Chief Justice Azzopardi added that presumably it was the same people who filed the complaint that gave the scoop to the newspaper despite a decision that the outcome should not be made public.

“If a law is not right or is outdated, it should be changed, not broken,” he said.

Adding that laws applied to everyone, including members of the judiciary.

Industrial production index increases by 2.9% during May 2020

Gonzi in favour of any constructive proposal to resolve PN crisis