The first anti-corruption protest is being organised on Monday after a brief hiatus due to the coronavirus placard. People armed with masks and placards gathered outside the Parliamentary building on Monday evening. Activists chanted “Minn Kastilja ghal Kordin” (From Castille to Corradino Correctional Facility”, and “Daphne was right”, among other slogans.

Ahead of the protest, the organizers outlined its three demands: the setting up of a Joint Investigation Team (JIT), the sacking of implicated politicians, and a detailed account by Enemalta on the Montenegro deal as well as the shouldering of responsibility by its directors. 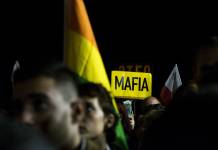 The protest was organised in the wake of the recent scandal involving murder suspect Yorgen Fenech who allegedly profited and pocketed millions when Enemalta acquired shares in a Montenegrin wind farm project.

The protest also comes after disgraced former OPM Chief of Staff Keith Schembri testified in court this morning. His testimony was suspended and he will be recalled to testify at a later stage.