One of the survivors on board the Norwegian-flagged Ocean Viking operated by SOS Mediterranee and Médecins Sans Frontières (MSF) has tried to escape Libya five times. Newsbook.com.mt spoke to Nicholas Romaniuk who is a search and rescue coordinator from SOS Mediterranee.

Asked about what kind of stories they have heard from the survivors on board, Nicholas said that the stories are typical of the kind of narratives they have heard in the last couple of years while operating in the area. He added that, however, some are worrying, since people are talking about repeated efforts to cross the Mediterranean sea. He referred to one of the survivors who has tried to cross five times; the last time he was on a shipwreck a couple of weeks ago. On that boat were a 60 other people who died except for him, as none of them knew how to swim. The boat had capsized.

Nicholas added that he is not sure whether the man was rescued by fishermen or the Libyan coastguard; however he had ended up back in detention, before trying to pursue the journey again. He added that the next time he tried escaping Libya, the asylum seekers were robbed on beaches by the smugglers.

The man was finally put on a boat with some 80 other asylum seekers and sent out at sea. This was his fifth attempt before being rescued by Ocean Viking.

“It’s a miracle that he is still alive,” Nicholas added, remarking that the boats used are not seaworthy and they often break apart, as they had seen in their last rescue when people ended up overboard. He observed that situations such as these show the desperation… and people are faced with two choices – staying in Libya or taking the risk of going into the sea and potentially dying

Asked about the current situation on board, Nicholas referred to the deteriorating weather conditions. He mentioned that MSF medical team is being kept busy treating a number of people who are seasick. While the situation remains calm, Nicholas observed that they will soon need to disembark these people so that they can receive the treatment they need. He highlighted that one of the rescue operations was considered “critical” as the rubber boat burst shortly after they had finished distributing life jackets to those on board.

When asked whether they fear that the Ocean Viking will meet the same fate as Proactiva’s Open Arms vessel (currently in Italian waters but unable to disembark), Nicholas voiced his concerns that Ocean Viking might meet a similar fate. He observed that this was not in accordance to maritime law, adding that people from a shipwreck should be disembarked in a place of safety as soon as possible.

He added that this was not happening, and the problem remains ongoing since there is no mechanism for the disembarkation of the survivors. What we have seen over the past year, is ad hoc agreements among EU member states. However standoffs have become quite common, often leaving NGO boats along with asylum seekers onboard stranded at sea.

Nicholas added that this prolongs the people’s suffering, saying that while the vessel is great, there is little comfort on board, with some of the people having to sleep on the deck. He explained that some of the people are talking about some traumatic experiences they have been through.

“They are just children, and somebody’s children have been through some terrible experiences,” he added referring to the 103 minors on board. He added that children need protection and to be treated for their traumas rather than kept on a ship for a prolonged period of time.

Asked about the political situation, the instrumentalisation of migration issues and the lack of EU naval assets in the Central Mediterranean, Nicholas said that SOS Mediterranee continues to repeat the same message, that is that the EU as a whole needs to come together to prevent people from dying at sea.

He explained that this could mean sending vessels to the area to conduct search and rescue, and also setting up predictable disembarkation mechanisms. He added that their mission is only to save lives at sea, adding that there are other agencies that are capable of dealing with what happens before and after. He remarked that SOS Mediterranee only focuses on the aspects of search and rescue in this humanitarian crisis in the Central Mediterranean.

He observed that while they are asking the EU to fulfill its duties and save lives at sea, everything seems to be going in the opposite direction. He added that since the European naval assets have been removed, the NGOs had to step in and fill in the gap.

“We hope that the EU will step in and take its responsibilities at sea to save lives,” Nicholas said adding that at that point civil search and rescue NGOs would not be needed anymore.

“Despicable effort on the part of politicians”

Asked about claims politicians have sometimes made, that NGOs collude with traffickers, Nicholas described the attempt as despicable. He reiterated that they are only trying to do one thing and that is to prevent the loss of lives at sea.

“SOS Mediterranee and MSF have no alternative agenda; we are saving people who are at sea escaping Libya,” he stated.

He observed that smugglers and traffickers put people’s lives in danger and what the NGOs do is completely the opposite.

“It is disgusting to compare our rescue efforts to that of smugglers and traffickers,” Nicholas remarked, adding that it is frustrating for a rescuer like himself to have to justify their actions.

“It is absolutely vital that NGOS continue their work” 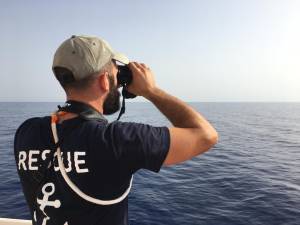 Asked about the role of NGOs and the importance of having such civil search and rescue missions, Nicholas observed that it was important that the NGOs continue their life-saving work. He explained that this year has been one where NGOs have been stuck in ports looking for ships or had had their vessels under preventive seizures, and therefore prevented from operating at sea.

He observed that people are still leaving from Libya and trying to get to Europe. He added that the lack of rescue vessels in the area multiple shipwrecks has resulted in people dying.

“It is crucial for these vessels to be in the area,” Nicholas added, speaking about the work of civil search and rescue NGOs.

On being back on rescue missions

Speaking to Newsbook.com.mt Nicholas described the past months as “intense” as they tried to get new vessel ready for search and rescue. Sailing down to the Libyan search and rescue area, the crew on board the Ocean Viking did not know what to expect. However, once there, they realised that multiple boats were at sea, some for days, with multiple rescues taking place over a short period. He added that if the Ocean Viking had not arrived when it did to the area, the potential for loss of life would have been “huge”.

Rescue vessel stopped from refueling in Malta because of SAR mission

Lifeless body and person in critical condition brought in by AFM