At Italy’s Oglio Po hospital, 25 out of 90 doctors are infected with the coronavirus, compounding the strain faced by a health system overwhelmed by the world’s second biggest outbreak.

Adding in nurses, technicians and other employees, a fifth of the hospital’s personnel has tested positive, hospital director Daniela Ferrari said.

They and healthcare workers like them almost certainly unwittingly spread the virus before needing treatment or quarantine themselves, researchers and unions say.

The picture is the same at other hospitals, among family doctors and in nursing homes – exacerbated, unions, sector leaders and medics say, by them not having enough masks and gloves when the outbreak was detected a month ago.

“We do not have sufficient resources and especially staff because apart from everything else, now the staff are beginning to get sick.”

Meanwhile in Germany
Germany to return to austerity after coronavirus crisis 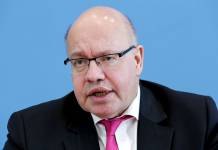 In Lombardy, the Italian region with the highest number of cases and deaths, at least two hospitals became vehicles of contamination, with patients infecting medical staff who then spread the disease as they travelled around their communities before a stringent lockdown was imposed.

At a national level, 4,268 health workers – or 0.4 per cent of the total – had contracted the virus as of March 20, according to the National Health Institute.

In Lombardy’s northeastern city of Bergamo, 134 family doctors out of 600 – or 22% – had fallen sick or were quarantined, Guido Marinoni, the head of the local association of general practitioners, said. Three doctors have died.