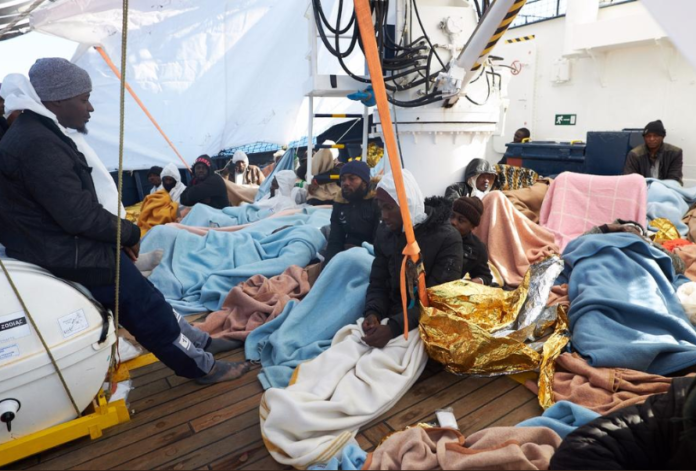 Sea Eye has said that Italy’s insistence on separating rescued migrant families aboard the ‘Alan Kurdi,’ was a violation of human rights.

This action is understood to have, ‘violated the principle of family unity (enshrined in article 16 of the European Human Rights Convention and all HR treaties and national Constitutions).’ Sea Eye’s representative has explained.

Speaking in at an event organised by Mediterranea in Rome today, Sea Eye’s representative Carlotta Weibl, said that an arrangement had been reached between the German Foreign Office, European Commission, other European Member States and Italy, which would see the humanitarian evacuation of two families with small children from the rescue vessel.  This agreement was reached without Sea Eye’s involvement. 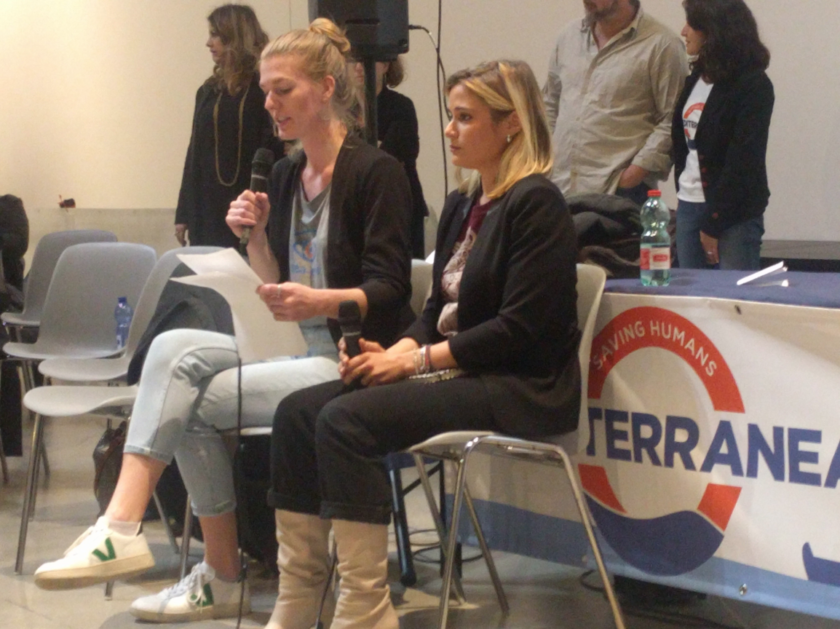 The address comes after Sea Eye’s rescue vessel ‘Alan Kurdi’ rescued 64 people crossing the Mediterranean on the 3rd of April. The crew was prevented from entering Italian territorial waters and disembarking those rescued in the closed ‘safe-port’ in Lampedusa.  The Italian Maritime Rescue Coordination Centre allegedly considered the vessel a threat ‘to the peace, good order or security of the coastal state,’ under Article 19 of the UN Conventions of the Sea.

It is understood that the Italian authorities had subsequently communicated different plans to the Sea Eye crew, telling them that they would be taking only the mothers and children of the families, and leaving the fathers.

Weibl says that the rescue NGO had not been consulted or had time to react to the email by the Italian Maritime Rescue Coordination Centre (MRCC) in Rome, outlining the plan. 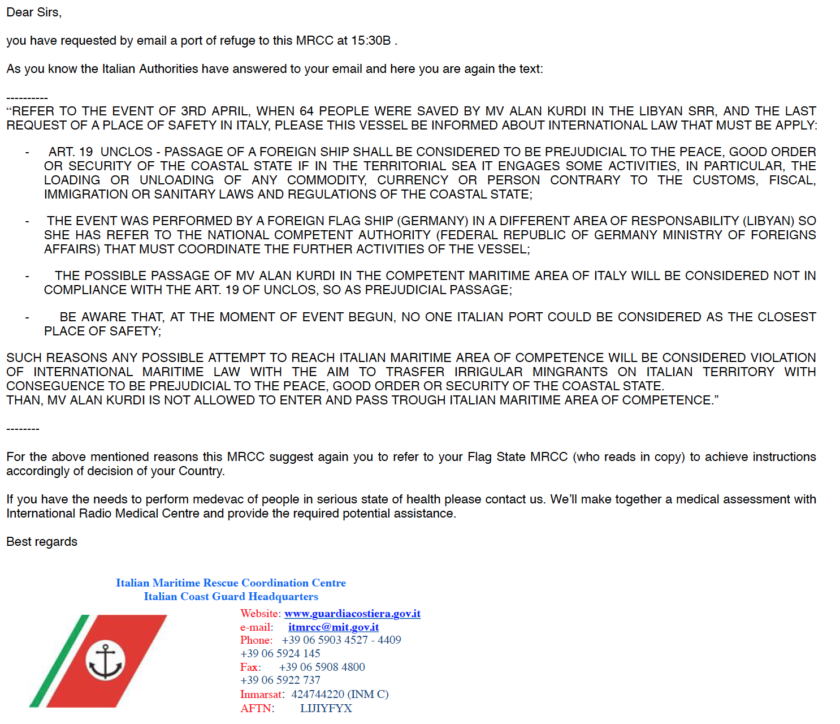 When the two Italian patrol vessels arrived to separate the families, it was the families themselves who decided to stay together on board the ‘Alan Kurdi’, thus aborting the mission.

Weibl says, ‘We strongly denounce this approach and demand Italy to apply the same human rights to refugees and migrants as to European citizens. Actually, these are “rescued people” and should not be treated differently by categorizing them based on their legal status, as “migrants”: at sea there is no migrant, banker or plumber: there are only people.’ 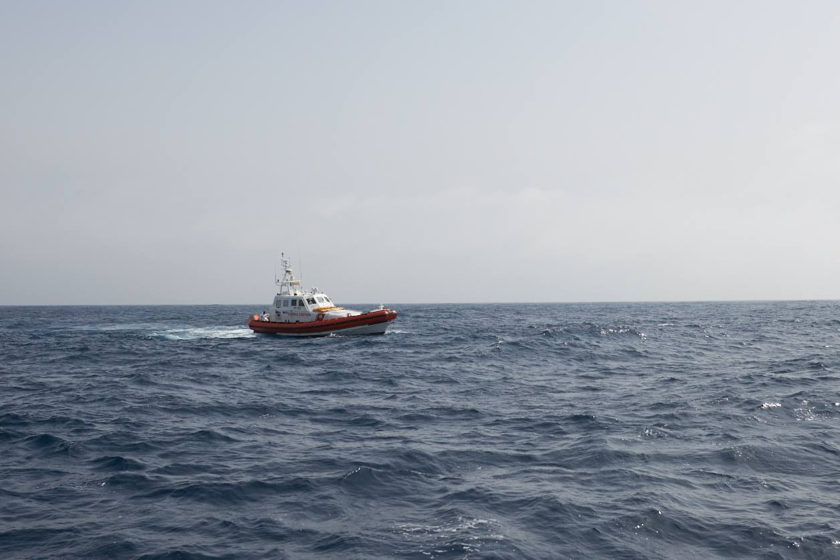 Calling on humanity and human rights

At this current time, the rescue vessel is in international waters close to Malta, awaiting further instructions. This was decided after consultations with the German Authorities who believed that it was not possible for those rescued to be disembarked in Italy.

Weibl explains that food and water on board is running out and with a storm approaching this evening. They are calling on the humanity of European Member States to act ‘in the name of humanity and in accordance with human rights.’ 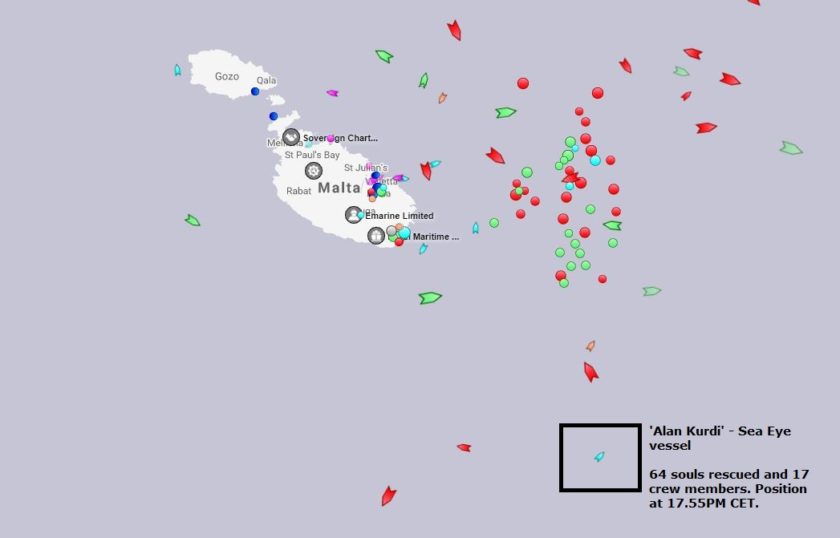 ‘Rescuing persons from distress should be carried out independently from political agendas within single states. Nevertheless, it seems like the solution to our situation can only be a political one. We have become dependent on the negotiations between EU states, which represent an unacceptable distortion and violation of the law applicable to SAR operations. We are suffering in this position, where you risk being arrested if you follow the law and do what is right, while you are forced to prolong people´s suffering by doing what states request.’