Italy will rush 10,000 student doctors into service, scrapping their final exams, in an effort to help the struggling health service cope with the coronavirus which claimed another 345 lives.

The death toll rose to 2,503 over the past 24 hours, the Civil Protection Agency said, while the total number of confirmed cases increased to 31,506 from a previous 27,980 – the largest number outside China. The crisis has pushed hospitals to breaking point at the epicentre of the contagion in northern Italy and left other regions scrambling to strengthen their own health systems as the number of infected rises nationwide.

“Lombardy is on the point of collapse. All the intensive care beds and respirators are being used,” said Matteo Salvini, head of the League party which governs the wealthy region. A potentially dangerous development is the rise in cases in the province of Milan, up by 343 in the last 24 hours to 2,326.

The 17% rise compares with a much smaller increase of 11% in Lombardy as a whole. The epidemic has so far taken a relatively light toll on Italy’s main cities, but there are now 964 confirmed cases in the densely populated financial capital which numbers 1.4 million residents.

University Minister Gaetano Manfredi said the government would let this year’s medicine graduates start work some eight or nine months ahead of schedule and waive the mandatory exams they normally sit before qualifying. “This means immediately releasing into the National Health System the energy of about 10,000 doctors, which is fundamental to dealing with the shortage that our country is suffering,” he said in a statement.

The graduates will be sent to work in general practitioners’ clinics and at old peoples’ homes, freeing up more experienced colleagues who will be sent to the rapidly filling hospitals. 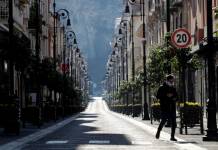 Meanwhile while other Italian cities share stories of flash mobs of singing citizens on social media, the city of Bergamo is pervaded with silence, only broken by the sound of ambulance sirens. There are a few attempts at celebrating life, but no one is singing. Bergamo is counting its dead.

This needs to be stressed: the passage of the Coronavirus through Bergamo is leaving in its wake a list of names and faces which will not be reported on the media, but which every inhabitant here cannot help noticing and missing. This is the region which has been worst hit by this epidemic. And this is evident in the coffins which are laid out in churches, the crematoriums which are working 24/7, the undertakers who cannot keep up with their work.