On Thursday 6th June, the eve of the Sette Giugno public holiday, Pjazza Teatru Rjal will be presenting a one of a kind evening featuring Italian television star Massimo Lopez together with the Big Band of the Malta Concert Orchestra.

Lopez, crooner and showman like no other, will perform a selection of swing classics, in which he will revisit the milestones of some of the all-time greats such as Cole Porter, George Gershwin, Jimmy Van Heusen, Richard Rodgers and others. A series of successes ranging from the 30’s to the 50’s, made famous by great performers like Frank Sinatra, Tony Bennet, and Sammy Davis JRsuch as Fly Me to the Moon, My Way, I’ve got you Under my Skin and the Theme from New York, New York to mention but a few. 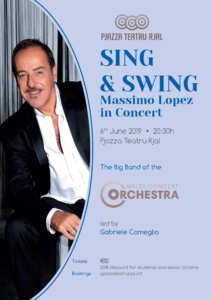 Lopez’s love for this style was cultivated for many years before it blossomed thanks to the collaboration with one of the most prestigious Italian jazz and swing formations, the Jazz Company led by Gabriele Comeglio who will also be leading the Big Band of the Malta Concert Orchestra in this spectacular concert.

Comeglio’s illustrious career included collaborations with Grammy Award winners such as Bob Mintzer and Dee Dee Bridgewater and with important Italian pop stars such as Fabio Concato, Lucio Dalla, Mina, Ron and Franco Battiato amongst others.

In typical Massimo Lopez fashion, the concert will include funny gags, monologues and the same irresistible, trademark imitations that had led him to great TV success fusing the great Sinatra-Bennet-Davis masterpieces with imitations of politicians past and present, from Antonio Di Pietro and Romano Prodi to Giuseppe Conte, as well as some of the great Popes in history.

The concert starts at 8.30 pm. Students and senior citizens may benefit from special discounts on concert tickets.

Tickets may be purchased online.

Pjazza Teatru Rjal summer events to kick off in August