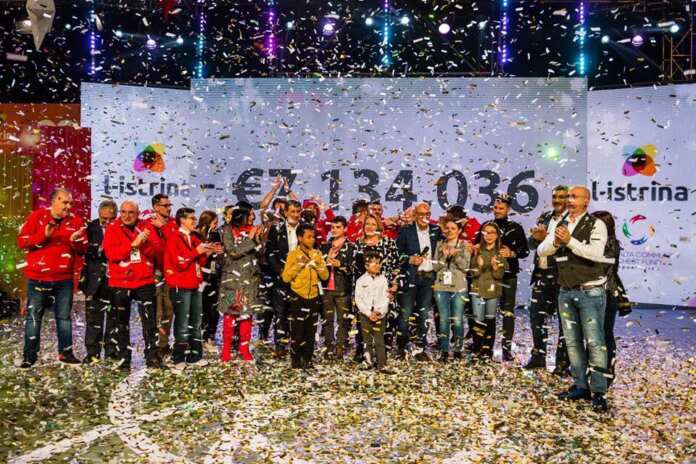 President Marie-Louise Coleiro Preca said she was touched by the Maltese generosity and proud of the nation’s kind heart.

The annual telethon, l-Istrina kicked off on Wednesday at noon. The question remains whether the funds collected would surpass last year’s amount. So far, donations have gone past the €5 million mark.

According to host Peppi Azzopardi, for the first time in Istrina history, the lines remained open throughout scheduled news bulletins. Azzopardi said that operators “cannot afford a break”.

In the first few hours the €1 million was gathered after a donation by the Vienna Choir Boys who donated more than €200,000. The President’s Fun Run also garnered an impressive €270,000.

Last year more than €6 million were collected, surpassing the previous year by €500,000.

The President’s Fun Run organised by the Office of the President supported by BNF Bank raised €313,515 for last year’s l-Istrina.

Ahead of the actual telethon day, coins were collected and later counted on 21 December at BOV Headquarters.

The whole telethon will last 12 hours. The event is taking place at Kirkop Sports Complex, the money raised will go to the Malta Community Chest Fund Foundation.

Archbishop appeals to public to be generous in their donations

Archbishop Charles Scicluna in his latest video blog appealed to the public to be generous when donating to l-Istrina. He also reminded that another fundraising marathon is scheduled for 1 January in aid of Dar tal-Providenza.