Following a public outcry on statements made by Zarb himself on the assassinated journalist Daphne Caruana Galizia, Zarb had announced on Facebook that he will stop commenting publicly. Newsbook.com.mt had reported a longer clip which showed Zarb endorsing a statement by a friend. 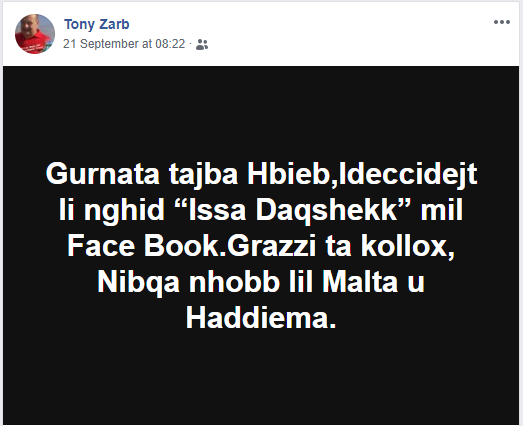 It appears that after considered thought and careful deliberation, Zarb has reconsidered his initial position. He said, in a vlog, no less, that he will continue to write following the encouragement he received from his friends. He said he shall do this while ‘paying more attention’.

Zarb opened his new vlog citing the encouragement he received from friends. He also referred to advice he had received from “genuine friends” whose advice might sound harsh but was for his own good. In his vlog, Zarb said that his friends advised him against “the dark forces” (forzi tad-dlam) in the country who are taking note of what he was saying. According to his friends’ advice, these same “dark forces” were using what he said in order to concoct stories in his regard. He said that he would continue to write but would be paying close attention to those observing him from afar.

Zarb also spoke of the “damage happening to the country”. Without condemning any allegations of corruption, Zarb said that a tourist in Valletta may come to think that Malta was in the throes of some disaster, or the entrepreneur who might get the impression that people were being murdered in Malta and would refrain from investing in the country.

The seven minute monologue ‘in defense of my country’ with a direct appeal to ‘those who are feeling pent up tension’ (qed iġimgħu ġewwa fihom), described as ‘in the moon’ those people who said that government had not spent a penny on infrastructure. Using words such as ‘hurt’ and ‘damage’ repeatedly, he proposed a more ‘positive’ view of what was going on in Malta which was going through ‘the best of times’.