Superintendent Keith Arnaud testified this morning before the public inquiry board. The press could only follow the first 20 minutes of his testimony as the board suggested it would be better if it is held behind closed doors.

The public inquiry is tasked with among other things to determine whether the state did all it could to prevent the murder of investigative journalist Daphne Caruana Galizia. 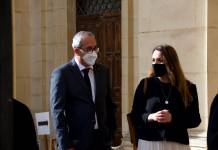