Family lawyer Bernard Grech will become the Nationalist Party’s next leader following today’s leadership election as he has obtained more votes than the incumbent, Adrian Delia.

12,663 voted for Bernard Grech, that is 69.3% of the party members while Adrian Delia got 5,622 votes, 30.7%. There were also 77 invalid votes. In a statement issued by the PN’s Electoral Commission, shortly after the official result was announced, it was said that 18,361 out of 21,660 individuals have voted which means 85% of the party members. 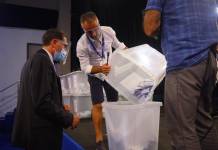 The party’s electoral commission, chaired by Peter Fenech, is set to announce official results shortly. 85% of the 21,499 paid-up members (tesserati) eligible to vote have done so, with 76% availing themselves of the five days of early voting offered.

Voting closed today at 4pm, with voting taking place at the party HQ and in various party clubs around the country. All ballots have been moved to the party HQ in Pietà so that the votes may be counted. 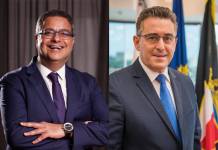 Grech is the second successive PN leader chosen from outside Parliament, after Delia himself. MP and entrepreneur Ivan J. Bartolo has already offered to give up his seat to make way for Grech: since he was himself elected via a casual election, it will be up to the party to co-opt the replacement of its choice.

The prospective PN leader financed his electoral campaign through crowdfunding, collecting more than €50,000 in three days from over 1,300 donors. He has pledged to publish an audit of campaign expenditure, and to donate any surplus funds to the party.

His campaign was not without controversy, however, after the early September revelation that he had fallen behind on his tax affairs. Grech, who has since settled all dues, acknowledged he should do better but also questioned the timing of the leak to the press.

The leadership election was held on the strength of a decision of the PN’s general council on 1 August, with the council having rejected Delia’s preferred option of a simple confidence vote among the tesserati.

Delia had already lost confidence votes among the party’s parliamentary group and its executive committee, but insisted that only the tesserati could force his removal. It appears they may have done just that.