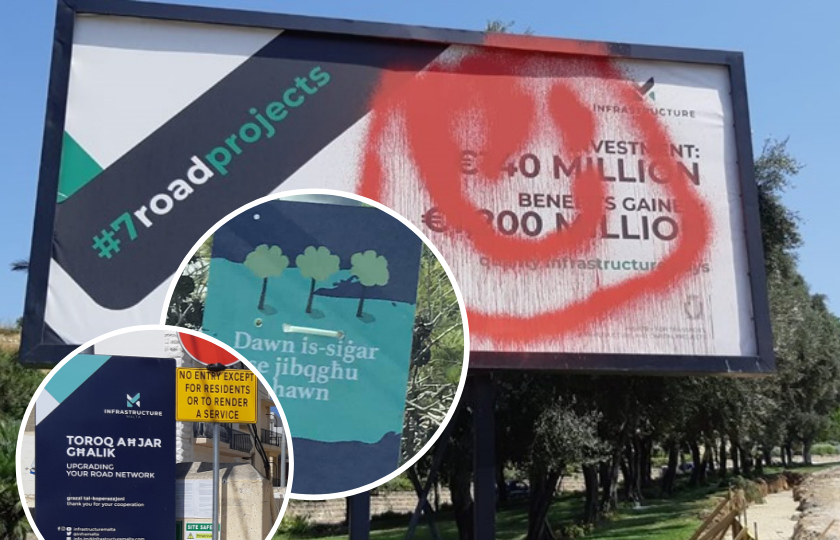 Infrastructure Malta (IM) spent just under € 6,000 a month to place nine billboards conveying its messages to the public.  This is apart from hundreds of Euros spent on other advertisements including €600 spent to place banners on Saqqajja hill, prior to a protest against the removal of trees for the Central Link project .

An Infrastructure Malta spokesman told Newsbook.com.mt that the multi-million Euro investment in Malta’s roads and other infrastructure projects, requires constant communication and consultation with the public.

IM is using nine billboards at sites of major road projects, such as the reconstruction of the Tal-Balal Road, Regional Road and the Saint Lucia roundabout and underpass informing road users about the benefits of such investments.

“These nine billboards worth € 5,900 a month, plus other expenses necessary to change their canvas (if they are torn or ripped during a storm or they are vandalized) as well as when moving from one project site to another,’ the spokesman said.

Signs in over 85 residential roads

IM explained that it was adopting many different forms of communication. Among these means were the use of billboards and signs in the same streets where some work is being done.

‘We’re are erecting signs next to roads where contractors are working, providing health and safety details and how the public can contact Infrastructure Malta or its contractors, in case of any difficulty.’

According to the spokesman these signs appear in more than 85 residential streets which are being redeveloped as part of the €700 million investment in Malta’s streets.

They add that they also explain the role of the European Union in these projects. These are said to be include with the cost of project and are ‘mandatory.’

These are understood to be found at the Marsa Junction and projects on Triq il-Buqana, Triq l-Aħħar Ħbit mit-Torok, the Breakwater, the Mgarr port in Gozo and many others.

€600 for posters before the protest

In July, IM used posters to inform the public that it was not true that the trees lining the street of Saqqajja Hill would be cut down. According to the spokesman for IM, ‘this happened after many people were concerned about the false impression given in some public communications. The estimated cost for the posters is €607.’

The spokesman added that IM was using ‘many other ways’ to communicate with the public, including through Facebook and Instagram.

According to the Minister for Infrastructure Dr Ian Borg, between April and May 2019, Infrastructure Malta had spent more than €25,000 on advertisements. Borg revealed the expenditure during a a parliamentary question by the Nationalist MP Jason Azzopardi.

Borg also said that between September and October 2018, IM has spent more than €750 on Facebook advertisements. Borg revealed this during a further parliamentary question from PN MP Karol Aquilina.